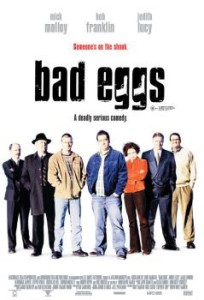 Bad Eggs is Aussie Hot Fuzz lite. A reasonably clever approximation of a big budget cop thriller with the stubbornly Australian unwillingness to conform to formula, a wickedly dry sense of humour and a refreshingly ‘normal’ cast of non-perfect people.

The film follows detectives Ben (Mick Molloy) and Mike (Bob Franklin), who after a series of increasingly shambolic (and unlikely) occurrences find themselves busted to street cops. The duo nonetheless pursue a series of clues at the urging of Julie (Judith Lucy), a nosy reporter who is also Ben’s ex.

Along with sporadic help from a meek computer expert, the trio delve further into a tale of corruption that stretches further than any of them could ever imagine.

Directed by Tony Martin and featuring a bunch of the D-Generation comedy group, (and a bunch of hangers on the D-Gen found along the way) with cameos from many of the who’s who of Australian acting royalty, most of the, playing against type, Bad Eggs might not have the attention to detail of Hot Fuzz or the big set pieces of any number of Hollywood’s ‘finest’, but it is undeniably likeable and often very funny. It actually comes across as a student film made by weekend labour of love made by especially promising students with an exceptional set of connections – and I mean that in the best possible sense.

Molloy, Franklin and Lucy share an effortless chemistry, all three are long time staples of the Australian comedy scene, and those of us who grew up watching The Late Show and Jimeoin will recognise the many cameos and references along the way.

Bad Eggs might not have the awkwardly quotable lines that garnered The Castle a cult following, but I’d argue this is a better film, and I’d rather watch this again than that particular case of Oz overkill.

Final Rating – 7 / 10. Proof that when you take the pretty faces, the action, the stunts and the bullshit from a cop thriller, you can still come up with something worth watching.