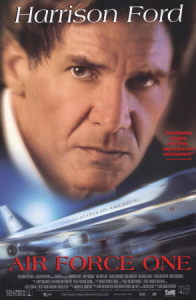 When Jim Marshall, the President of the United States of America, declares a war on terror during a globally televised speech he expects a response. He probably didn’t expect one quite so swiftly.

Marshall, hangers on, miscellaneous staff and his wife and daughter all board the flying Presidential limo Air Force One for the ride home, expecting only peace and quiet and a little down time. Little do they realise that a crack squad of Eastern European ne’er-do-wells headed by the vicious and malicious Ivan (Gary Oldman).

The rest is such a patently obvious attempt at ‘Die Hard on a Plane’ that I stopped caring about what happened next and started thinking how much better that movie was. Marshall of course is McLane, the man assumed overboard with no option but to take the plane himself. And while I love me some Gary Oldman, rest assured that his character here is no Russian Hans Gruber – as much as it clearly wants to be.

There are running gunfights all over the aircraft that no one in the nearby rooms seem to hear. Nor are there apparently any alarms notifying them of conflict. The guys that do know are all based in Washington, and include Vice Prez Bennett (Glenn Close), who must simultaneously make key decisions about how to deal with the incident whilst keeping others who would take charge at bay.

The film takes great – and obvious – pains to portray Marshall as ‘just another regular guy’, which is why Harrison Ford is playing him. But gee do they lay it on thick. In between juggling a family and a fairly important job, all Jim wants to do is grab a cold beer and check out a college football game. All the while he says the right things, relates to everyone around him, and makes the right decision for the right reason at every turn.

Look it’s all very political and unfortunately just not very interesting. You can fall for the noble and admirable angle concerning the leader of the free world rolling up his sleeves and getting down and dirty with the world’s scumbags, but as an action movie this is an oh so by the numbers replica of a film universally acknowledged as a genre high. It doesn’t even compare favourably to Con Air, a film far more juvenile and ridiculous but all the more effective for embracing its own stupidity. By doing everything short of having Jim Marshall save the world while carrying innocent bald eagle chicks in an American flag, Air Force One lost my vote.

A few weeks ago my wife was watching and rewatching a clip on Youtube where David Beckham was fed lines by TV host Ellen through a hidden mic, much to the confusion of the young clueless woman that he was talking to. My wife was laughing so hard she cried. When I asked exactly what was funny, given that there were no jokes to be enjoyed, she sobered up and said ‘but it’s David Beckham!’. Air Force One is the same scenario, a routine film that we are expected to think is more than it is due to the presence of The President of The United States.

Final Rating – 5.5 / 10. I could be more forgiving, but my responsibility is to the people, and I simply cannot negotiate with lazy money-grabbing stupidity. Mr Marshall, “GET OUT OF MY DVD PLAYER!