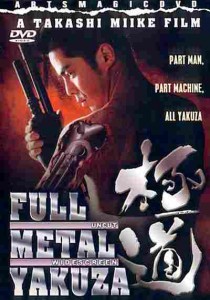 Audition and Ichi the killer alone have kept many a Samboy-eating, pot-belly having, awkward facial-hair sporting single guy warm through those long winter nights. Myself included.

Most notable for his no-holds barred, nothing is too over the top style and his prolific release schedule, Miike has his paws on any number of crazy weird for weird’s sake films over the last couple decades.

This is a slightly earlier work, though as you will read it is no less wacky. It just isn’t that good or different to set it aside from the pack.

This is probably why Weird Al Yankovic is suddenly amusing every few years when he latches into to some popular song and tweaks it slightly. Every so often it is funny to hear a zany version of something just for a laugh.

But you can’t keep releasing the same thing every year and expect it to sell, which is why Weird Al has two crappy sellers in between his occasional hit… and it is why Takashi Miike is know as “the guy who made Ichi the Killer”, and not “Ichi, plus Demon Pond, plus N-Girls Vs Vampire”. Look at his imdb page, I could go on and on with insane sounding names.

The fact is for every time that an audience is ready to be entertained by a left field movie, there are years where they just aren’t interested in a half cyborg wannabe Yakuza warrior.

Which brings me to Full Metal Yakuza, which must have been written in 3 minutes after the title was conceived.

Now just try to follow me here, this’ll no doubt get messy.

A Yakuza heavy named Tosa attempts a hit on his rival gang leader which nearly succeeds, and is very definitely bloody, he is imprisoned as a result.

He is admired by Hanage, a Yakuza underling who desperately wants to be part of the team, but is just too useless and ineffectual to get the shot. In early scenes he is beat up by kids, shows cowardice in scenarios that might earn him credit, and is unable to “please” his chickie. To make matters worse his own brother is most certainly “In”, and he makes no secret at times of his contempt for the inferior Hanage.

After time elapses Tosa the Yakuza thug is released from jail, and Hanage is given a task to drive him meet the boss. He feels this is his big chance to make a good impression, only he doesn’t realize that the gang boss, wary of inflaming a gang war, has sacrificed both Tosa and Hanage to appease the Yakuza boss that narrowly avoided death earlier.

Phew, you still there?

So after the hit, Hanage wakes up, or should I say is rebooted, by a mad inventor who has used parts of both Hanage’s puny body, (including his head), and Tosa, (including his wang), and filled in the gaps with robotic inserts and metal reinforcement, hence the title.

He heads back to society, initially trying to cover up his new metal status. He finds out that his Bro is now (very successfully) banging his chick, and that no-one misses the “old” Harage at all. Worse than that he finds that if he is caught in the rain his metal parts short circuit, which leads to the question of whether rusting between the thighs causes sparks when chafing occurs?

So after the short circuit he wakes up again, realizes that if he eats metal he is temporarily superpowered, only the Yakuza side sometimes takes over which turns him into a super-killing machine capable of only over-the-top violence, only the best kind there is.

Really they should have ended the movie there, as Miike no doubt had nothing further in the script than “A Yakuza robot would be awesome!”, but there are still 45 minutes to go.

Without spoilers some “other things” happen, Tosa’s ex (widow?) gets involved and both parts of the robot are thirsty for revenge.

There is much gushing and severing, blood curdling creams abound and Takashi’s obvious disdain for women manifests itself often in frequent scenes of pointless torture and violence.