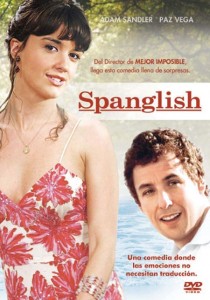 Half of the world’s marriages end in divorce. Despite this we are bombarded each year with a billion Hollywood rom-coms pairing up mismatched couples in unlikely situations.

Real life relationships are rarely between two people 100% compatible in every way, unless the couple met at the cloning plant. Or maybe a sci-fi convention…

If they did human nature is so combative that we’d find reasons to argue anyway.

So back to the half of marriages ending in divorce. Even the aforementioned rom-coms at least illustrate how even the happiest fake relationships don’t come smooth, there’s always the inevitable break up 14 minutes before the credits roll (always the guy’s fault by the way).

So I think we can agree even successful pairings are hard to maintain. It takes work, commitment, understanding and concessions – from the guy – to make it.

Which is why Spanglish is so polarising to me. Here is a couple that just shouldn’t be together, unfortunately all it takes for them to realise this is by introducing a new party that seems absolutely perfect for one of them…

I guess there are spoilers below – read on at your own risk.

John (Adam Sandler) is the nicest guy going around. A great dad, an especially understanding husband and a hard worker who is accommodating to anyone and everyone. John just wants to get along. This is his strength and deficiency.

John is married to Deborah (Tea Leoni), a neurotic, annoying thoughtless bitch, who feigns interest in everyone so as to appear like a nice person, but is really totally only about herself.

This two plus hour film has Deborah constantly disrupt and infuriate everyone while constantly intoning her own personal mantra of “I’m really a nice person. Why does everyone not understand this?”

The reason is you’re a bitch Deborah.

During the film every other non-Deborah character takes turns apologising for this fact. Most of all John, but also Deborah’s alcoholic mother who lives with the family, her teenage daughter Bernie, even the housekeeper.

Flor (Paz Vega) speaks no English and just wants a job that pays enough to send her own daughter Christina to school. She is a devoted proud mum determined to raise her child right, and a first rate housekeeper, always efficient and ever friendly.

Essentially the opposite of the reprehensible Deborah. 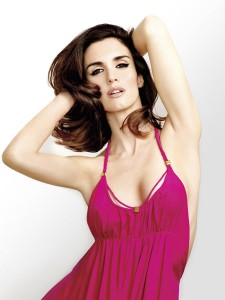 As if you need more proof of her opposite-ness, one is Tea Leoni and the other is hot as hell.

While the film wants to be seen to deal with cultural differences, language issues, parenting styles and the difference between the hard working haves and the wasteful have nots, it boils down to one thing; Deborah is a bitch, Flor the opposite and John the poor sap betwixt them.

Arnie would never have had the time to mess up California if his housekeeper looked like Paz Vega.

In reality if you extract Deborah from this film all confrontation, disruption and impoliteness – deliberate or otherwise – is removed along with her. John wouldn’t continually bang his head against the steering wheel on the way back to work while lamenting his doormat style of husbandry, Flor wouldn’t quit every 18 minutes in the film, Bernie wouldn’t lament her own existence and perhaps even Mum would stop drinking… probably not.

So two hours of unnecessary arguments, totally avoidable misunderstandings and one of the least convincing sex scenes between the two people you would least like to see in a convincing sex scene, before the film ends in exactly the way you hope it wouldn’t.

Final Rating – 6.5 / 10. Half of marriages end in divorce. My main issue with this film is that a pair so obviously not right for each other chose not to consider that this stat isn’t necessarily a bad thing.

I’d like this movie a lot more if John grew a pair, took a good look at reality and told Deborah to fuck off before walking away to enjoy the rest of his life with Flor. Despite the fact this would made for yet another unfortunate statistic, I would find that a far happier ending.

While I try to throw a joke or two into proceedings when I can all of the opinions presented in my reviews are genuine. I don't expect that all will agree with my thoughts at all times nor would it be any fun if you did, so don't be shy in telling me where you think I went wrong... and hopefully if you think I got it right for once. Don't be shy, half the fun is in the conversation after the movie.
View all posts by OGR →
This entry was posted in Film, Movie Reviews, Playa Hatin', Rants 'n' Ramblings, The Grey Area. Bookmark the permalink.