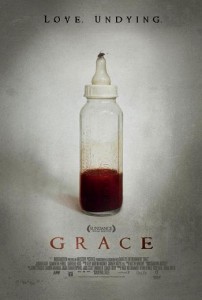 I mean the poster tells you everything you need to know!

1) I have simply seen too many of these B and C flicks to be effected anymore.

2) Or horror filmmakers are getting lazy.

3) Or Grace is simply a bad movie.

I think it is a combination of all three in this case, but if I had to point the finger I would nominate 1, just before 2 and 3.

Grace is a pretty well made and well acted film, there just isn’t too much to it.

When you go to a DVD shop and pick up a cover, you scan the title and any quotes on the front before flicking the wrist to read the summary right?

In the case of Grace, this 2 step process told me exactly what would happen in the film, start to finish. This wouldn’t be a bad thing if there was something entertaining in the film, but in this case there really isn’t.

There are no explosions, jokes, flashy fight scenes or dramatic kills, precious little suspense and unfortunately for a horror film nothing in the way of scares.

Put simply if you read the cover and think “Oh that would be gross”, you’ve already been as impacted by this film as you would be by watching it.

Now how to explain the film in a way that doesn’t give anything away?

As we see quite graphically in the opening moments, Michael and Madeline have finally conceived after years without success. Rather than have the birth at a hospital Madeline decides to use the services of a midwife named Patricia, something that her Mother in Law (M.I.L.) does not approve of.

An incident during pregnancy escalates into an argument between the doctor appointed by the M.I.L. and Patricia, and ultimately Patricia’s actions narrowly avoid what might have been a catastrophe for the unborn child.

Only on the way home from the hospital the couple’s car runs off the road, removing Mike from the picture and causing Madeline to miscarry. Against medical advice she decides to go to term and deliver the stillborn baby naturally.

This is sooooo not a movie for mothers or pregnant women to see.

After the delivery of an obviously rubber baby, Madeline refuses to allow Patricia or other nurses access to the baby, and clutches the dead infant to herself for a few minutes.

Now, everything to this point sounds (and is) very realistic, this stuff unfortunately happens all the time.

But this is a horror movie…

Patricia re-enters the birthing room to see if she can convince Madeline to relinquish the newly dubbed baby girl Grace, only to find that she is (now) alive and suckling.

Apparently this was only mildly shocking, and after a short time Madeline takes Grace home to begin their new life.

I’ll keep this brief from here, but it becomes a movie with two main rivals vying for Grace’s attention:

– Grace is, like all babies, very demanding of Madeline’s time and energy, and she becomes drained and exhausted tending to her every need.
– The M.I.L. is initially unaware that Grace was even alive, having been told the worst after the car accident. As she has lost her only son she now becomes extremely (and grossly and graphically) maternal, and decides she wants custody of Grace.

I realize re-reading this that it is a bit vague, but rather than spell it out this is a film with a very straightforward (if twisted) plot that is easily predicted, and I don’t want to ruin what precious little surprise it holds.

If you see the DVD cover, try not to read the back blurb, it gives away the entire film and removes any interest in the film.

In my opinion though, if you miss Grace, you haven’t missed much anyway.