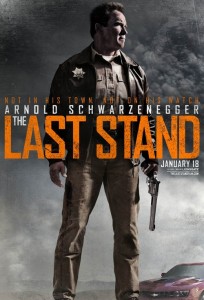 In his first real film in a decade Arnie returns as Ray, the sheriff of Sommerton, a small town near the Mexican border. While as an 80s and 90s teen I welcome Arnie back to where he belongs, but I can’t help but feel that even before the action starts here he already looks like the T1000 shortly before he was lowered into the molten lead pit at the end of T2.

Life is slow and steady in Sommerton, meaning Ray and his three deputies don’t have much to do. After a fast paced career in the big city this is just how Ray wants it. Easier dealing with busybodies and local eccentrics than machine gun wielding maniacs. Or dreadlocked alien trophy hunters. Plus he gets to give the hairy eyeball to all the young señoritas as they cross the border, offering the uglier ones a role on his staff…

(The tone is set early when Johnny Knoxville pops up as a local gun nut. Surely Hollywood realises by now that this jackass has never and will never be in a credible movie?)

This changes abruptly when in nearby Las Vegas, Martinez, the incarcerated leader of a vicious South American drug cartel escapes during a ‘routine’ prison transfer. Obviously not a carefully planned transfer, given the truck doesn’t even get out of the car park before this most wanted of criminals is on the run with the FBI team headed by Agent Bannister (Forest Whitaker) in pursuit.

And here’s the hook; rather than lie low or take a helicopter, Martinez opts for an audacious run for the border in a stolen hosted up concept car (thanks to Corvette for the product placement) with an attractive female FBI agent handcuffed in the passenger’s seat. Probably the most labour intensive, unnecessarily convoluted escape in history.

I mean why a car? Because this car is apparently fast than any chopper. And before you argue that there’s not as much traffic in the sky, Martinez thought of that too. As he hurtles his hotted up muscle car at fast pace along the freeway, a team cronies and hired guns organised by Peter Stormare) clears a path in advance.

Agent Bannister sees all the signs and eventually realises that Sommerton may well be the last chance for anyone to apprehend Martinez before he reaches Mexico and freedom.

Luckily Ray is a genius. On the strength of a quick convo in a diner with some truck drivers he already knows something is up, and he summons the troops and prepares for a showdown in the most geriatric and creaky Commando style ‘getting ready’ routine this side of Driving Miss Daisy.

Arnie gets to shoot a mini gun and isn’t called upon to do much physical stuff. His moves are a bit rusty, as are his quips; “Welcome to Sommerton”? Sadly the best moments in this film are the car stunts, which are stylish, creative… and Arnie-free.

With Arnie incapable of doing the heavy lifting – both literally and figuratively – they spread the work around a mix of character actors (Whitaker, Stormare), faceless noobs (whoever the Martinez guy was) and unfortunate gimmickry (Knoxville).

The Last Stand is a decent and entirely forgettable action flick, highlighted by some neat car trickery, some so-so action bangery, and thankfully only a bit of awkward hookery. I could have done without the gun totin’ granny and Knoxville’s buffoonery.

In reality the film isn’t that bad but there is little chance you’ll confuse this with anything from Arnie’s heyday. At least it’s the best Arnie film with ‘Last’ in the title – which has far more to do with the crapulence of Last Action Hero than the greatness of this.

Final Rating – 6.5 / 10. It’s just good to have Arnie back – even like this. I give him a couple more efforts before I demand his retirement, lest he become a Jackie Chan self parody.

While I try to throw a joke or two into proceedings when I can all of the opinions presented in my reviews are genuine. I don't expect that all will agree with my thoughts at all times nor would it be any fun if you did, so don't be shy in telling me where you think I went wrong... and hopefully if you think I got it right for once. Don't be shy, half the fun is in the conversation after the movie.
View all posts by OGR →
This entry was posted in Arnie Schwarzenegger, Film, Movie Reviews, Superstars, The Grey Area. Bookmark the permalink.