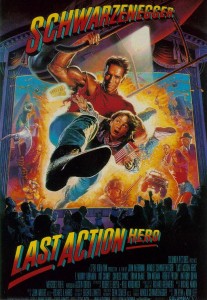 These posters can’t all be Indiana Jones.

Jack Slater (Arnold Schwarzenegger) is John McClane, Dirty Harry and James Bond combined – at least in terms of box office success and public acceptance where this film is concerned.

Young Danny is his ‘biggest fan’ and is trembling with the knowledge that the premiere of Jack Slater’s 4th adventure is imminent. (Danny is so young that he isn’t yet haunted by the memory of Indiana Jones and Kingdom of the Crystal Skull…)

So when a creepy old guy that runs his local theatre offers him a ‘special preview at midnight if he comes alone’ Danny is so excited that his freckles might just fall off. So excited that he doesn’t think about just how creepy that offer really is if you think about it.

So Danny sneaks out of home and heads to the theatre, where the creepy guy gives him his ‘magic ticket’ and promises him a night he won’t forget…

Wait, is this a big 90s action movie or a prequel to Hard Candy?

Thankfully before the creepy guy can ‘punch Danny’s ticket’, the magic ticket transports him smack dab into the movie during a big action scene, full of wall to wall stunts, explosions and cinematic ignorance of logic and the basic laws of gravity.

So now a real kid’s in the fake film. What happens next? Apparently Jack Slater himself is unaware that he is a fictional character existing just to provide fleeting enjoyment to a paying audience, so he is dubious that the kid who suddenly appears in his car in the middle of a high speed chase is really just a paying onlooker. But once Danny proves he knows his Slater history and – thanks to cutaways and forshadowing – not only the identity of the bad guy but what he has planned, Slater’s clichéd forever yelling black Sergeant makes them partners.

The humour allegedly comes from the fact a normal kid has been thrown into the fabricated world of film. Danny meets the requisite ‘hot daughter’, the afore-mentioned ‘angry sarge’, the ‘smooth but dangerous bad guy’ and the ‘oily Euro-villain’, all of whom stick very close to stereotype. Danny points out that in ‘Slater’s universe’ everyone, even the bystanders *COUGH Extras!* are all gorgeous, all the phone numbers start with the 555 prefix and that cartoon cats just don’t walk the streets and appear to spout pithy dialogue in real life.

And of course they end up in the ‘real world’ at one point so that we can have all the same ‘fun’ in proving that the reverse is also true.

The Last Action Hero loses its way early and keeps sinking deeper with every carton cat and guy that only exists in black and white (because he’s from old movies. Get it?). I mean can anyone truly claim this is a ‘misunderstood gem, when a big chunk of the film revolves around the build up to a corpse farting…?

There are a few moments of levity that I put down to Shane Black’s skills with dialogue that made The Last Boy Scout and Kiss Kiss, Bang Bang both better than you would think, and unfortunately way more examples of standard Hollywood excess that make so many films worse than you would think. There are cameos galore and gimmicks by the bunch, but as far as laughs, thrills and spills, where Last Action Hero is concerned they are as rare as a non-impregnated housekeeper at the former Governor’s residence.

Final Rating – 5.5 / 10. Sugar-coat it all you like Arnie fans; this film was the beginning of the end for Arnold, with only Cameron’s True Lies temporarily stemming the tide after it.