I’m tired of trawling the bargain bins and enduring the sloppy seconds of cinema. While on occasion it’s fun watching thousands of litres of off-red blood gleefully pumping from a hose held next to an awful actors throat, to paraphrase the words of the immortal Cookie Monster, Deliberately Bad movies are a sometimes indulgence.

This time I am looking at plain old regular bad movies, the kind that actually get a cinema release. The kind the previews allow you to think aren’t awful, but through an off decision here or there managed to not quite crack ‘worthwhile status.

But they are still lacking in certain areas. 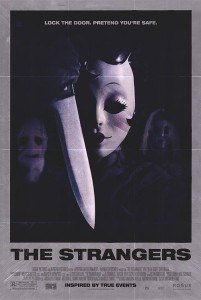 This may be the best credentialed film to ever appear in this space. The Strangers is surprisingly effective and is almost guaranteed to inspire occasional nailbiting and frequent checking of the remaining running time – the ‘I like this but also want it to be over all the same’ sign which denotes a decent horror movie. The fact is that the 90 minute tale of ‘what happens to James (Scott Speedman) and Kristen (Liv Tyler) one night’ is so basic and straightforward that it is actually ideal for the haiku format.

Young Cou-ple home from night out

awk-ward. But ‘bout to get worse

A knock. Wrong add-ress… or not?

Their tor-ture and pain is ours

The first half hour is all ominous intensity, with no answers to the traditional horror questions of ‘Who? Why? and What?’ forthcoming. Unfortunately the faster and louder it gets the duller and more recognisable it all becomes, and the ending sucks.

But amid the brief running time are a few very taut and tense moments which house the film’s greatest achievement, namely making me momentarily give a shit about what happens to Scott Speedman and Liv Tyler.

Final Rating – 6.5 / 10. A genuinely nasty horror film without flash, gore or silliness, The Strangers can’t maintain the momentum, but the bits that work do it very well. 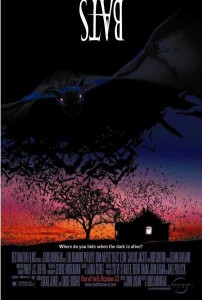 Poor old Lou Diamond Philips*, at one point he was La Bamba and on top of the world. A few years later he was a Young Gun. By the end of the 90s he was chasing rubber bats hell bent on wiping out all of North America.

Hot on the heels of Anaconda and Arachnophobia comes Bats, one of the sillier and nonetheless pleasantly enjoyable B movies I have seen in a while.

You can’t spell bats with-out ‘B’!

I knew this would suck. I just had no idea it would suck so good. About two minutes in I wondered aloud how long it might be before someone gasped ‘that’s not possible’. To no-one’s surprise the answer was 10 minutes.

The bats look ridiculous and as threatening as a Cabbage Patch Kid. Somehow they are still more authentic and realistic than I would wager Lou Diamond Phillips’ Texas accent came across.

Final Rating – 6.5 / 10. At a cheesy 85 minutes this is no-one’s idea of a good movie, but it ticks off all my requirements for a guilt free good time. 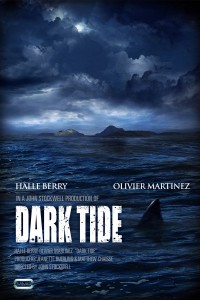 It’s like no-one told Halle Berry that since Gothika and Catwoman her days as leading woman headlining a film were over. Sure The Call was a pretty effective low budget thriller, but expecting to have guys line up to see the 37th shark movie of the week or Berry in a bikini over a decade since she put the goodies on display in Swordfish was wishful thinking indeed.

In fact are we sure that Halle Berry is still the same one that won an Oscar? If yes, then surely the Academy are plotting a visit to either;

But that hasn’t happened yet. So here’s a movie she was in about killer sharks…

Kate likes sharks. She swims with them.

No tanks and no cage.

Of course they go shark di-ving

Where all things go o-ver-board

though this is all a big bore

Despite the TV movie quality and derivative plot that decides to try to get clever 80 minutes in exactly about the point it should really be finishing. Despite the absence of chemistry between Berry and her co-star – some French guy who is apparently her offscreen boyfriend.  Despite the bad press and total lack of consumer interest, Dark Tide could have been much, much worse.

Well maybe just much worse. But cut 30 minutes of over-reaching and forced developments, straighten up the plot and halve the number of characters who perform total attitudinal 180s through the film, and this could be…

… oh who am I kidding. It would still be mediocre and less than The Call.

Final Rating – 6 / 10. Sharknado might be infinitely worse in quality, but I’d still rather watch that again than wait in vain for this Low Tide to rise.

To sum up, while none of these films are really worthy of recommendation, all three are somehow unfairly overlooked and/or criticised. That said, if you rented all three you should prepare yourself for quite the uneventful evening.

(Bats has some silly fun moments though.)

While I try to throw a joke or two into proceedings when I can all of the opinions presented in my reviews are genuine. I don't expect that all will agree with my thoughts at all times nor would it be any fun if you did, so don't be shy in telling me where you think I went wrong... and hopefully if you think I got it right for once. Don't be shy, half the fun is in the conversation after the movie.
View all posts by OGR →
This entry was posted in B Movie Haiku Reviews, Film, Movie Reviews, The Grey Area. Bookmark the permalink.