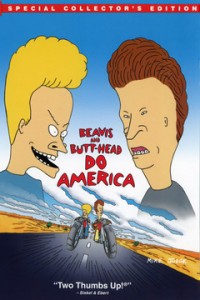 Beavis and Butt-Head are a pair of clueless, metal loving teenage morons who spend their entire waking existence in front of the TV making grunting and grating noises, the most annoying of which is their attempts at speech.

I watched them for about 4 minutes one day in the 80s or 90s and wondered what the fuzz was. Aside from them watching MTV and commenting that every band was gay or lame and that every video chick needed ‘doing’, their entire shtick seemed to be about the deliberate misinterpretation of words and phrases.

Anyway someone thought them funny enough to make an 80 minute movie about them. Someone was wrong.

When someone steals the dim-witted duo’s TV one day, for an awkward moment they can hear their own thoughts. The silence bothers them. 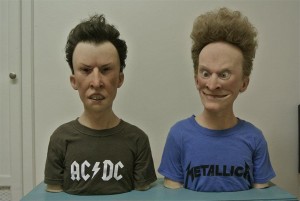 Within minutes of looking for their beloved idiot box these box-headed idiots run into a delightful misunderstanding and unwittingly agree to travel across country to ‘do the wife’ of a gruff scuzzball named Muddy (Bruce Willis).

So off to Las Vegas we go, where the ‘wife’ doesn’t want to be ‘done’, despite being actually named Dallas (Demi Moore). Her counter-offer sends the boys off across the USA leaving a trail of destruction and stupidity in their wake, especially once they get their ‘butts’ onto a doomsday device and become top of the FBI’s Most Wanted list. Along the journey they meet their possible biological origins and repeatedly run into a little old lady and a retired couple who are essentially Hank Hill and his wife.

The animation is deliberately crappy and the voice acting deliberately silly, I’m not so sure that they set out to make this so unfunny though. Once you realise that Beavis and Butt-Head are primed to hear only what they choose to hear and ignore anything normal or sensible, there is only so far this kinda stuff can take you.

Not far at all really.

I like animation. About the only shows I watch weekly aside from The Walking Dead are Futurama, The Simpsons, American Dad and co (for the record Brickleberry sucks). I never got Beavis and Butt-Head as a five minute piece of filler, I sure as hell don’t get this 80 minute version.

Final Rating – 5 / 10. America, consider yourself ‘done’ – especially if you paid for a ticket for this one.

While I try to throw a joke or two into proceedings when I can all of the opinions presented in my reviews are genuine. I don't expect that all will agree with my thoughts at all times nor would it be any fun if you did, so don't be shy in telling me where you think I went wrong... and hopefully if you think I got it right for once. Don't be shy, half the fun is in the conversation after the movie.
View all posts by OGR →
This entry was posted in Bruce Willis, Crappy Movies, Film, Movie Reviews. Bookmark the permalink.