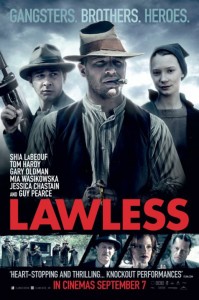 Since Indiana Jones 4 I have straight up refused to watch anything featuring Shia LeBeouf. I mean the guy was aggravating in Constantine and I Robot, and he was a large component of the catastrophe that rendered my beloved Indy impotent, (though his being 80 didn’t help).

In fact one of the most unpleasant moments watching movies this year came when I was watching the Dumb and Dumber sequel – already a horrible day by the way – when I realised that the young precocious tosser was none other than The Boof.

I call this sudden realisation that someone you absolutely detest is unexpectedly in the film you are watching ‘Schneidering’.

And so far what has this LeBeouf free diet cost me? A few noisy giant robot flicks and a couple other films that wafted through with no impact. So much for the so-called new breed of Hollywood, as Shia himself might say ‘No, no, no, no, noooooo’!

That all ended recently with the news of Lawless, which stars one of my current faves Tom Hardy and the ever reliable Guy Pearce, and features a bona fide cinematic treasure in Gary Oldman. The deciding factor came when I found it was directed by John Hillcoat, the man who made a man and his son’s long and pointless trek through bleak cannibal infested terrain so worthwhile.

So time to bite the bullet. Shia or no Shia, I was watching Lawless… Wish I didn’t. It’s not bad, but that’s about it.

United States. Prohibition era. The Bondurant Brothers run the bootlegging operation in a sleepy county notable for very little, and they are good at doing it.

Forrest (Tom Hardy) runs the show and ensures the cops are kept placated, brother Howard is there for back up and occasional crazy, and Jack (Boof)… well Jack’s there.

And just when it seems that this gravy train will never derail, Floyd Banner (Gary Oldman) swoops into town guns blazing to prove that change is inevitable.

Banner runs a large operation in Chicago and wants his cut. Hot on his heels is Special Agent Charlie Rakes (Guy Pearce), who is equally menacing but also has the law on his side. He brazenly approaches Forrest and calmly demands that he and the rest of the force get their cut in return for (continuing to) turn a blind eye. Either that or ‘we’ll clean you up’.

Forrest says no, and who is anyone else to argue given his reputation of being almost immortal, thanks to his several narrow escapes from certain death. But Rakes is not a man easily deterred from his goal.

And with this the stage is set, the irrepressible Forrest and his brothers of varying degrees of adequacy, versus Rakes and his toadies.

For some reason the bland Boof is positioned front and centre as the film’s star, despite Tom Hardy and Guy Pearce being far more attention grabbing. (Unfortunately for Gary Oldman fans his appearance is relegated to little more than a few minute cameo.) Hardy once again manages to exude menace and confidence without ever seeming to force anything, and both his gruff voice and (to my clueless ears) accent lend heft to his already imposing character. Hardy does get to flex a little in a couple scenes where Forrest puts his brass knuckles to bloody and sudden use.

The film is violent and unrelenting, with a slow and deliberate tone and a gritty flavour, buffed ever so slightly to fulfil Hollywood minimum requirements. Despite this unpalatable sheen and the regrettable inclusion of the Boof, Lawless is a legit flick and worthy of your time.

Final Rating – 7 / 10. A welcome antidote to other unnecessary Hollywood films – the ones Boof normally stars in. If someone ever gives John Hillcoat a decent script I am positive that he has a great film in him at some point.