The Loved Ones (Review) 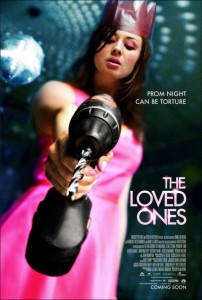 Imagine my surprise when I saw this film on Rotten Tomatoes and realised;

How did this slip by? Am I losing my touch? I mean The Exorcist stands at 85% on RT, The Descent 84%, The Loved Ones must surely stand tall among the Greats as an undisputed All Time Classic! Critics don’t get things that uniformly wrong…

Teen Brent was driving the car that hit the tree. His Dad died.

Wait. Scratch that. It means nothing in the film.

Start again. After the death of her husband Brent’s Mum doesn’t have much positive to say about cars. So the news that Brent’s girlfriend Holly is to drive them to the end of school year ball fills her with apprehension.

Brent is depressed and apathetic – even for a teen – his only ‘Likes’ are heavy metal, weed and Holly. He doesn’t want to go to the ball, but he wants to please Holly, so he listens to heavy metal and heads off alone to smoke some weed… and contemplate suicide.

Stop for a sec. That also is pointless filler. None of it matters here.

Brent’s buddy Jamie is a more typical maladjusted teen male. He is also a realist, he asks a goth girl to the school ball, praying that her total lack of personal pride and low standards might give him the chance to break the drought.

What does this have to do with the plot you might ask? Sweet F.A. I have no qualms about telling you Jamie scores – scruffy loser done good – because the repeated callbacks to he and the tall and curvy Elvira have nowt to do with anything.

In truth this film is a mess. It lazily cribs from many other films, not well enough to call itself a homage or effectively enough to even be labelled stealing. The one actual kinda original element is revealed and glossed over in 5 minutes, the filmmakers not even realising that they fell into a reasonably promising opportunity.

Brent’s background? Goes nowhere. His Mum’s fears? Irrelevant. Holly? There for a sex scene and to look worried. Jamie and Elvira? Well at least Jamie got his end away.

The actual plot – such as it is – revolves around a disgruntled girl angry at being politely turned down by Brent for the dance. She and her toadying Father kidnap Brent and host their own ‘rebel’ ball at their home, with Brent growing ever more reluctant as he realises just how psychotic this is all becoming.

I wonder what would have happened if Brent said ‘Yes’?

Are they even paying attention? Or do they not understand the genre to the point that they blindly point to some scenes involving blood and torture and say ‘yup, that looks like horror to me’?

Occasionally though, they are forced to attend an honest to goodness low budget hack n slash torture-porn effort because it represents something ‘home grown’. Because this is so rare they genuinely don’t know just how derivative and similar to so very many direct to DVD efforts it is, so they lazily slap a ‘not my cup of tea, but I can see that the kids might like it (stupid kids eh?)’ green stamp and move back to the new ‘Eastern European peasants dying in the muddy fields’ masterpiece.

Well I have watched hundreds of these things, I actively hunt them knowing full well most will suck but hoping for hidden gems. This is no gem.  It is unfunny, unscary and uninteresting. In fact it has nothing that hasn’t been already done and redone in the last few years. And done better.

As an Australian amateur who loves horror I wish it tried harder, even if that meant it failed bigger, just so I could care more about it.