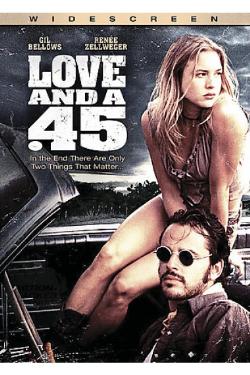 In the early 90s films like Reservoir Dogs, Kalifornia and Natural Born Killers convinced Hollywood studios that the slacker looking dude in torn jeans in their waiting room just might be the next Tarantino and make them squillions. This lead them to greenlight a bunch of stuff that would ordinarily never see the light of day, with the failsafe for the studio being most of the films were low budget, meaning the upside was high and the downside manageable.

Love & a .45 received minor notoriety and a few decent reviews upon release but was far from Reservoir Dogs 2, more Generation X Slackers hit the Road all Quirky Like…

In honour of Love & a .45 being a prime example of a Gen X film I will review it in a Gen Y friendly way.

Wattie has borrowed two grand from real dangerous crims to buy Starlene a ring and make her an honest woman #iknowright which compels him to agree to a heist on a local convenience store rumoured to hold a cool ten grand #cizzash. His conspirator on the job is Billy, a potential loose cannon covered in tattoos #ink – remember this was an age when having tattoos meant you were possibly dangerous, not merely over 16.

It is in the fleeing where we might allegedly find the poetry in the tale. Wattie and Starlene become wanted by the police #pigs , the loan sharks who lent Wattie the 2K #reallifeproblems , Billy who bursts back on the scene bald and rocking a huge fresh tattoo on his skull #frfrfresh, and the media who as always lap up the two photogenic vagabond lovers. For her part Starlene gets a little caught up in the attention and starts actively looking for more things to attract an audience (which is perhaps where Zellweger started doing that perpetual ‘kissy face’ that makes her look like she is forever posing for a ‘selfie’) #famewhore

Love & a .45 is one of those spur of the moment hipster things that crop up trying to cash in on what is #sohotrightnow , it is filled with slacker friendly tunes by such pre-emo luminaries as the Jesus and Mary Chain and Mazzy Star #shoegazing, and even a cameo by Peter Fonda #easyrider for street cred.

Gil Bellows is likable and charismatic as Wattie, Rory Cochrane steals the film as the genuinely loopy Billy and Renee Zellweger is fortunately in the 15 second window that spanned the time when she was too young to be deemed sexy and her fish-faced adulthood when it was incredulous that she would be deemed sexy.

Love & a .45 wanted to be one of those cult films that arrive at pivotal moments to shake the foundations of cinema #blairwitch but it just wasn’t that good #blairwitch2bookofshadows . Instead of carving out a niche in the post Reservoir Dogs market it arrived to polite applause and then sank without trace. Unfortunately I can find nothing that suggests that this disappearance was unwarranted.

Final Rating – 5.5 / 10. Violent, defiantly alternative and not as catchy as it wants to think it is, Love & a .45 is a nifty looking thing with nothing of merit behind it.