Sky Captain and the World of Tomorrow (Review) 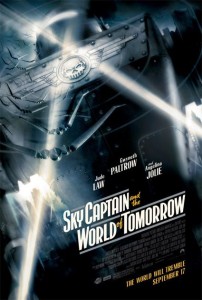 Sky Captain and the World of Tomorrow is an ambitious tale filmed almost entirely in green-screen and set in a fanciful alternate version of the 1940s, only with obviously impossible elements that clearly show us that this is not your Grandpa’s 1940s.

Well investigative reporter Polly Perkins (Gwenyth Paltrow) is interested in the giant robots. She is also interested in finding out why a number of German scientists have recently all gone missing at once. She consults with the dashing pilot known to most as Sky Captain (Jude Law) – although he also answers to Joe at times – to help uncover the reasons behind the disappearance. This being the alterna-40s when you couldn’t just google things. Things like dumb celebrity baby names (Apple?) and the contact details of hot loose nannies…

Of course they rapidly find out that the vanishing scientists and the giant robot assault aren’t necessarily unrelated events.

The clues all lead the duo across the globe in search of yet another German named Totenkopf, with a series of sequences that bring them into contact with such disparate beings including dinosaurs, underwater planes and of course robot ninjas.

The cast is OK and suitably noir, with an eye-patched English Angelina Jolie appearing as a tomboyish Frankie in a secret aircraft landing base in the clouds, and Giovanni Ribisi as Dex, Sky-Cap’s dogsbody. The action moves along at reasonable pace and with almost every background being entirely computer generated the backdrop is always eye catching and original.

So what more could I want? (I mean Robot Ninjas!) Well for mine a little more polish and danger in the action sequences, and a few more jokes that weren’t of the dry ‘wasn’t that positively droll’ variety.

Comparisons to Sin City are inevitable thanks to the green-screen technique, even though this film was released prior to Rodriguez’s genre busting action-noir effort. However a more accurate measuring stick is The Adventures of Tintin, which shares not only the green-screen filming but also the boy’s own adventure central theme, and I would strongly argue does so with far more success.

I admire the visuals and think that there was a great opportunity given the pastiche of old school versus high concept, but ultimately Sky Captain and the World of Tomorrow is limited by the combined absence of charisma across the three headliners and the decision to favour imagery over action.

… thought so. Frankly all three are more known for their relationships than they are for their acting chops.

Final Rating – 6.5 / 10. The end result comes across as a practise version of Tintin, with an end result that is more admirable than it is likeable.