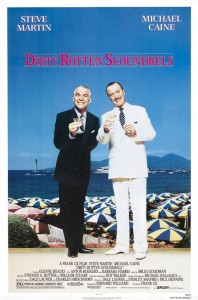 When Lawrence Jamieson (Michael Caine), the suave and debonair con-man to the French Riviera’s most rich and gullible women, hears of the unwelcome intrusion that is Freddy Benson (Steve Martin), a crass, exploitative and opportunistic AMERICAN *bleh!* on his prestigious turf he is aghast. Where is the class and dignity in clumsily ripping off easy targets and wide eyed vacationers? After a face to face meeting confirms his suspicions and Freddy learns of Lawrence’s true vocation the one thing that the two men can agree on is that two conmen operating on the same patch is one too many.

After a short training period (the Ruprect sequence alone more than makes the film worthwhile) a contest is devised. The winner takes the turf.

The loser is himself turfed.

The target is Janet Colgate (Glenne Headley), the American ‘Soap Queen’ holidaying in a local hotel, the agreement being that the first to ‘extract’ $50,000 in 80s money from this young woman is declared the winner.

Initially Lawrence goes with the tried and tested ‘Prince of a needy country’ angle, until Freddy opts for the ‘sick grandma who desperately needs an expensive operation’ routine, however they soon discover that even the best laid plans that have worked many times previous don’t go so smooth with another party actively trying to derail them.

Caine and Martin are the perfect foils for each other, the cultured and quick thinking European versus the brash and boorish America, and their many scenes together bristle with energy and immaculately time lines.

The film is amusing from the first minute until the last, with a few hilarious scenes along the way and several twists and turns as first one then the other shyster momentarily seems to have the other hand as Janet drifts along seemingly oblivious to it all. Thankfully never mean spirited and with a higher jokes per minute quotient that you will see nowadays here is a film that proves with the right cast and the right backdrop that a minor classic can be produced without bodily fluids and gross outs.

Which is probably why no-one talks about this film now…

Final Rating – 8 / 10. Dirty Rotten Scoundrels might be a peg below the greatest comedies of the era such as Groundhog Day, Coming to America and even Martin’s own Bowfinger, but it’s a small peg.