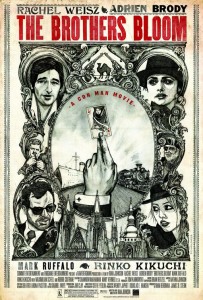 After the excellent little tempter named Brick showed solid promise and Looper instantly became my Film of 2012 until proven otherwise, I was pleased to discover that director Rian Johnson had also previously released this film.

‘Great’ I thought, another awesome film to discover.

Not quite. The Brothers Bloom has an awful lot of stuff going for it, but being a great film is unfortunately not among the ‘stuff’.

The brothers of the title were orphaned at a young age and spent their formative years being shuffled from one foster home to another on account of their mischievous instincts and misadventures.

Now adults but still inseparable and intent on working every angle, Stephen (Mark Ruffalo) and Bloom (Adrien Brody) have been actively scamming the wealthy and oblivious for a quarter century (with their mysterious and practically silent Japanese female assistant Bang-Bang) in elaborate and intricately planned ways – thanks to Stephen’s nous and Bloom’s ability to gain the trust of almost anyone.

Until now, when Bloom decides that enough is enough and quits for the umpteenth time. And this time he means it.

Next time he’ll mean it.

With the promise of ‘one last job’ the crew sets their sights on an eccentric wealthy shut in named Penelope (Rachel Weisz). While Stephen is a ‘thinker’ and Bloom is a ‘feeler’, Penelope is a ‘doer’ of the highest order. As she tells Bloom once he has gained her trust – thanks to her hitting him with her car – if she hears of something that takes her fancy, Penelope instantly immerses herself in the hobby or pastime until she has mastered it, regardless of how pointless or the practical possibilities of the skill or talent.

This may make her the world’s only juggling, harp playing breakdancing DJ… Strangely enough driving was obviously not one of these special interests.

Within days Bloom has ingratiated himself into Penelope’s life, and the former recluse braves the real world to be with him on a fake journey to go ‘antiquing’ with Stephen and Bang-Bang.

It is an elaborate con spanning many continents and a lengthy journey, during which the foursome encounter characters and situations that may or may not be part of the con, and setbacks that might actually be required. And this is where the problem for me lies…

Good con-men movies are always worthwhile. I recently watched The Grifters for the severalth time and Dirty Rotten Scoundrels for the umpteenth. Johnson has created four great characters to manipulate through the story, with Brody and Ruffalo perfectly cast as the brothers, and Weisz especially vibrant and wide eyed as the ‘mark’ Penelope. Special mention too to Rinko Kikuchi for making the enigmatic Bang Bang far more than a silly one note character, even though she only says maybe 3 words in the entire film.

But a decent premise and a great cast doesn’t guarantee a great movie. I eventually grew tired after the 37th misdirection, or maybe it was the 23rd red herring, or perhaps the 6th faked death. Regardless of which it was, there are only so many hairpin bends to endure before one succumbs to motion sickness.

Still, Rian Johnson nailed Brick and absolutely shot the lights out with Looper.

Final Rating – 6.5 / 10. Consider The Brothers Bloom as a training exercise, a film where he developed the characters and the central theme but couldn’t quite line everything up.

The end result is a film less than the some of its parts by a director destined for much much more.