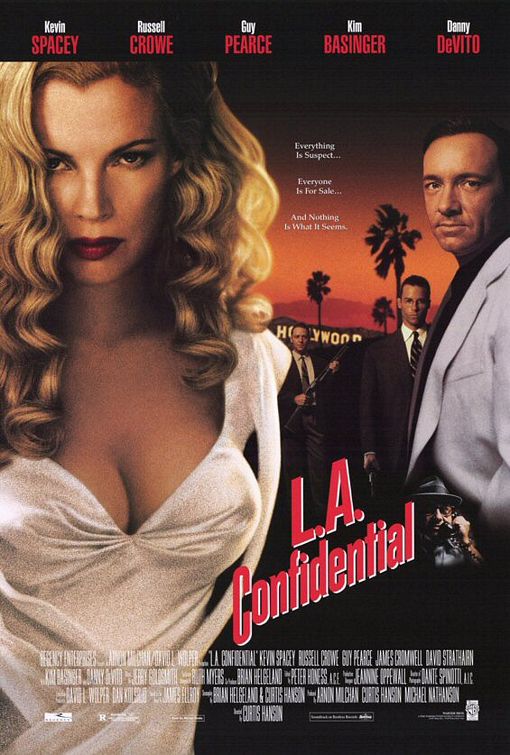 As a drama L.A. Confidential is a triumph in every respect. By faithfully and stylishly telling an excellent and often intricate James Ellroy tale centred in 1950s Los Angeles, director Curtis Hanson proves that dour and mature noir content doesn’t have to be dull and un-entertaining.

L.A. Confidential brilliantly examines an era in law enforcement which wasn’t troubled by political correctness and media saturation and judgment. It does this by giving human faces to each of the black, white and grey areas.

Bud White (Russell Crowe) is the ‘black’. A hard as nails police ‘lifer’ willing to obey any and all orders from Captain Dudley Smith (James Cromwell), and do anything and everything to get a conviction – or to remove someone from the streets more immediately and permanently if necessary.

Ed Exley (Guy Pearce) is the ‘white’, a by the books son of a hero who is equally intent on getting the bad guys off the streets, then to complete the requisite paperwork after.

Jack Vincennes (Kevin Spacey) is the ‘grey’, a cop more focussed on his image and sideline as an expert liaison to the makers of television programs than actual police work but a good cop when he puts his mind to it. Which tends to be when he is spoon fed choice stories by Sid Hutchence (Danny De Vito) in exchange for exclusive media coverage of the sting.

The intricate tale starts with a seemingly random killing. A local restaurant named the Nite Owl is robbed, with a several bodies left in the aftermath. One of whom is Bud White’s crooked ex-partner.

The ensuing investigation delves deep into LA’s gritty nether regions, where corruption, crime and the darker side of ‘decent’ society are uncovered. At the centre of things seems to be a high class, low profile prostitution ring run by Pearce Patchett (David Strathairn), featuring hooker lookalikes (hookalikes?) of famous actresses and personalities of the day, one of whom being Lynn Bracken (Kim Basinger – who if you believe the poster is the star of proceedings).

Grim, dark and dirty for the most part, with a high body count for what is essentially a period drama, the film pursues several threads at once, with black, white and grey all taking turns at following up on various angles. For a long while we the viewers are left to piece things together, though at the end like a video of a broken pane of glass being played in reverse, all the random mismatched pieces come together neatly simultaneously.

At nearly two and a half hours L.A. Confidential could come across as bloated and pretentious as the rest of modern day Hollywood, but this is exceptionally plotted and expertly executed stuff with a top notch cast.

Final Rating – 8.5 / 10. While it is rarely mentioned in the same breath as Pulp Fiction, The Usual Suspects and Shawshank, L.A. Confidential is superior filmmaking of the highest order, and worthy of being mentioned in their company.