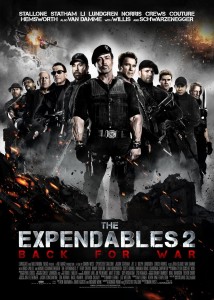 The Expendables burst out of the retirement home in 2009, with a cast of the who’s who of action – 20 years ago, who despite the ravages of age rocked huge biceps and tiny ‘roid influenced testicles.

Unfortunately its steadfast adherence to formula – admittedly a formula most of the cast helped create – and the presence of Mickey Rourke and his head shaped liked an oven mitt, meant that the title was unwittingly apt.

The Expendables was OK to middling fare, but it was hardly necessary.

Now after a couple years laid up in Lay-Z-Boys letting joint swelling ease and the latest botox to kick in, they’re back for the senior’s discount with Expendables 2: Still not really Required.

For a group called The Expendables these guys sure take it personal when one of their crew gets taken hostage or worse still, killed. Maybe the name is ironic?

The opening sequence of the film is a constantly entertaining, extra bloody rescue mission. Of who and why seems irrelevant – to be frank I can’t remember a zack from the plot of Ex 1 anyway – it is the ‘how’ matters. And the ‘how’ involves a head count of nearly a hundred bad guys (zero ‘Unnecessaries’). They are killed forwards , backwards and from a flying fox that has no reason to exist. They are beaten to death with pots and pans and stabbed with especially shiny knives.

A helicopter is exploded by a flying motorbike.

And the ‘Not Requireds’ don’t lose a drop of blood, nor do their natty berets become even momentarily dislodged.

No sooner are the crew on home soil and savouring a nice cold beer and some lame macho dialogue, Church (Bruce Willis) appears with an offer that cannot be declined. An ‘in and out’ extraction mission. Nothing could be simpler.

Unfortunately what Church didn’t take into consideration is that these guys were in the gym when the rest of the class was graduating kindergarten, so even simple isn’t necessarily so. It is when the mission goes wrong that they meet the leader of the bad guys, a group so blasé about their badness that they rock warning tattoos of goats on their necks. Aaaahhhh, the goat, nature’s most feared beast.

Back to the bad guy, I should have mentioned that he is played by Jean-Claude Van Damme. And how bad is this guy? Well let’s just say he wears black sunglasses at the bottom of a poorly lit mineshaft. He’s bad…

The middle stanza of the film has the guys taking stock, coping with loss and reconsidering what is really important in life, you know, weak shit. The only notable sequence involving any real pointless carnage is a cameo by Chuck mo-fo slo-mo Norris! And in truth you don’t actually see him fire a shot.

So it’s a relief when the finale brings everyone together for a good old fashioned 80s style minion slaughter. Sly, Arnie, Bruce and Chuck trade catchphrases and self effacing quips about their age, just try not to laugh when Sly drawls “Rest in pieces”.

Randy Couture, Dolph Lundgren, Terry Crewes and Jason Statham fill in the rare lulls with gunfire as they take out the not so important bad guys, and the *insert feisty female here* role goes to the wholly unnecessary and unremarkable Nan Yu as Maggie, who nonetheless impresses the boys and is a constant source of pleasant surprise – to them.

Chris Hemsworth has a role as a young and earnest sniper who bails the team out in the early stages, but who Barney senses his heart isn’t really, truly in killin’. Jet Li is criminally underused and literally ‘bails out’ on the film after the opening sequence never to reappear, and the most standout feature of Chuck Norris’s Booker is just how remarkable his beard dye job comes up onscreen.

Of the core group of the ‘Extraneous’s’ Statham is his ever reliable self, Crewes nearly pops a neck vein trying to be noticed, Dolph proves an actor he ain’t and Couture remains entirely charisma free and forgettable.

The film is mindlessly entertaining in the way that only truly silly actioners can be. Despite having the two best scenes in the series so far – you really think this cash cow ends at two? – The Expendables 2 cannot manage a higher score than the original, primarily because I just can’t label something this formulaic as being any better or worse than its predecessor, despite the fact that the guys on the poster invested the formula.

And in a definite sign of the confused priorities of America despite the almost constant bloodshed, decapitations and arterial sprays, there is not one fucking F-bomb in the film.

Final Rating – 7 / 10. The only thing thinner than the grip on this film’s reality is their collective hairline, and the only thing stretched further than the sense of logic is the skin on Sly’s forehead. Yep, more steroid-infused adventures from everyone’s favourite grandparents and their bouncers.

While I try to throw a joke or two into proceedings when I can all of the opinions presented in my reviews are genuine. I don't expect that all will agree with my thoughts at all times nor would it be any fun if you did, so don't be shy in telling me where you think I went wrong... and hopefully if you think I got it right for once. Don't be shy, half the fun is in the conversation after the movie.
View all posts by OGR →
This entry was posted in Arnie Schwarzenegger, Bruce Willis, Film, Jason Statham, JCVD, Movie Reviews, Sly Stallone, Superstars, Worthwhile Movies. Bookmark the permalink.