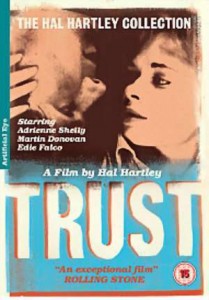 “Has anyone ever told you that you look like the Home Alone kid?”

Probably one of the least seen films that I have discussed over the last 6 months, this was a movie that I remember vividly as a teen, though in more glowing terms than I now see it.

Trust was made by an indie filmmaker named Hal Hartley, who was renowned for his dialogue heavy films exploring regular people going about their lives. Now that I revisit this some 20 years later I think that perhaps his work also merits the dreaded “quirky” tag.

The film starts with a domestic between a young girl and her Dad, the scene culminates with the Dad keeling over dead of a heart attack.

The girl is one two leads, her name is Maria, she is apparently high school age, is pregnant to the quarterback who she now wants nothing to do with, and not wanted at home as her mother blames her for the death of her dad.

The other lead is Matthew, played by Martin Donovan in deadpan mode. He is a marginally psychotic TV repairman who is bullied by his single Dad and carries a grenade around with him.

There is much more of a plot than Maria and Matthew meet, share their problems and decide to make a go of things together, the action occurs as they progress through and come into contact with the various other characters in the film.

No-one seems to get along, Maria’s mum hates her, and later Matthew. Matthew’s dad hates him, and everyone else it seems. Matthew is an angry loner who hates everyone and everyone hates, which leaves Maria and her unborn child as the victim of a tug of war.

Everyone in the film seems to be 5% off-normal, not quite enough to be a caricature, but more than enough that they could all aptly be described as weird (at least) by normal people.

In this vein Hartley is like Kevin Smith (really), he puts people that you might almost convince yourself that could exist, and in fact you might know someone who really reminds of one of them, only he fills every role with these one-in-a-million characters, so you have a town full of people that would ordinarily be the nut-job.

The dialogue is scripted down to the nth degree, which unfortunately leads to conversations that alternate between snappy and robotic, at times in the same scene. At times it is almost like the characters are starting their response before the other sentence is finished.

This film is most notable to me as being the first film I can remember seeing that had a character say the C-word, and a female character at that. If this sounds juvenile it is because when I watched the film; I was a juvenile, so it was a genuine surprise to me to see such a taboo word bandied about in an art house film.

Even now that I watch this movie and see that I perhaps was looking at my memories with rose coloured glasses, there are moments that are both calculated that still have an impact, you know that the director is trying to scream “this is important” and want to ignore it but it still works.

Like a good sad ballad, you know it is simply trying to manipulate your emotions, but turn off the lights and crank it loud and you can’t help but caught up in it. Only Trust is a 90+ minute movie, it’s hard to be “swept along” for that long when everything is so mechanical.

Final Rating – 6.5 – 10. As I said at times it works, there are just too many dead spots in between those times.