He Got Game (Review) 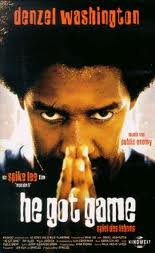 Everyone loves Jesus. Everyone wants Jesus.

Jesus Shuttlesworth is a ‘can’t miss’, ‘sure thing’ future NBA prospect. A young prodigy who seems destined for greatness, fame, fortune and renown on the hardwood even though he hasn’t yet graduated from high school.

College coaches want him wearing their jersey. College students – specifically the ones wearing the same colour shirts who chant ‘oooooooohhhhhh’ rhythmically while jumping up and down for entire games – want him on their campus. Agents want him in their stable. Women want him to be their Boo. Or Papi. Or Baby-Daddy. Or whatever they call that right now. His family want him to know just how close his family really is.

Jesus will make a lot of people a lot of money, and it seems everyone wants to be part of that ‘lot’.

Jake has 7 days of freedom to convince his son to sign on the dotted line. His reward if he has his much loved son sign the paper? Early release from the small dingy cell that he has called home for over a decade.

His challenge? Everyone loves Jesus. Everyone wants Jesus. Jesus too loves all his people… Well almost all. He hates his Father for the same reasons that ended up with Jake’s imprisonment. (I’ll leave out the joke where that might make him an atheist…)

Somewhere in this premise is a decent film, a careful character study that has a Father attempting to reconnect with his son. A boy struggling with a monumental decision without the support and guidance of his parents. Unfortunately Spike Lee couldn’t find that movie, He Got Game is instead confusing, dull and indulgent.

Spike made sure to get cameos from every college coach he could find. He made sure to have a quick word from a number of NBA stars of the time including of course Michael Jordan, whose signature shoes have enough screentime to deserve a poster credit. He made sure to namecheck Sports Illustrated, SportsCentre and co. Apparently though he couldn’t craft a decent, compelling and interesting story from the subject matter.

Sure Denzel plays the repentant Dad role well, Ray Allen is fine as son Jesus and a bunch of other character actors are all OK, but they have nothing to do and end up buried under the usual avalanche of Spike Lee staple elements; Pointless 1 second sepia cutaways. Overpowering musical score. Shrill, loud bad acting kids in flashbacks – (seriously Spike – does every movie need this hackneyed technique?) and the aforementioned cameos, more than you could throw an NBA ball at.

The film just isn’t that dramatic for a drama. Instead Spike just lazily trawls through the already known roadblocks and threats every young soon-to-be NBA millionaire faces, hoochie mamas, super-agents, fake-friends and family hangers on.

Nothing seems more perfunctory than the brief montage of naked flesh that accompany the news that rich black men are tempting to women.

And no-one seems more enamoured and spellbound than Spike in the scene where Jesus meets a sleazy, slick sports agent. It’s like Spike himself is pissed he never got his chance at the NBA dream and is living vicariously through his film.

Even the basketball scenes, featuring genuine NBA players of the time, lack any real oomph, just enough moments and perfunctory highlights to illustrate that yes, Jesus has skillz.

Subplots are introduced to be ignored, others raised just to tick them off and move on, and the two-headed parallel endings both made no sense. At least with ‘Do the Right Thing’ the confusing ending was forgivable because the first 90 minutes were interesting and powerful enough.

He Got Game doesn’t merit that forgiveness or allowance for ambiguity. It is a clumsy work of indulgence from a tireless self promoter who should be better than this.

Spike is a film-making Vince Carter, blessed with ability and vision, but too often allowed to showboat and make excuses for his own deficiencies.

Final Rating – 5.5 / 10. Of course Ray Allen has since spent a further 15 seasons in the NBA playing at a high level and destined for the Hall of Fame. If this film was an NBA player it would be grafting a career in a crappy overseas league, having long since worn out its big league welcome.

While I try to throw a joke or two into proceedings when I can all of the opinions presented in my reviews are genuine. I don't expect that all will agree with my thoughts at all times nor would it be any fun if you did, so don't be shy in telling me where you think I went wrong... and hopefully if you think I got it right for once. Don't be shy, half the fun is in the conversation after the movie.
View all posts by OGR →
This entry was posted in Crappy Movies, Denzel, Film, Movie Reviews. Bookmark the permalink.