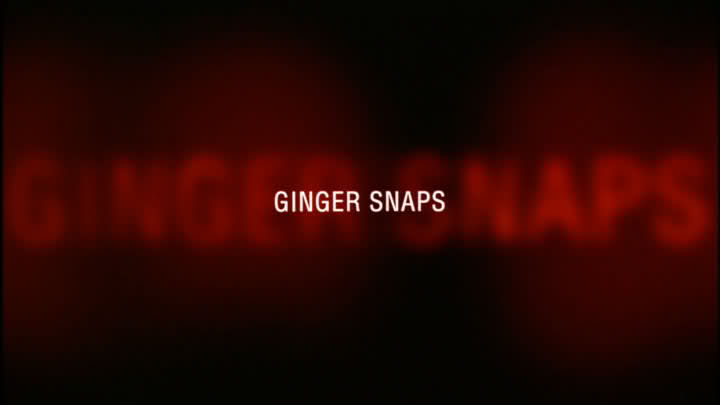 Before you quite rightly point out that all horror is for impressionable teens might I just say that ‘yes it is’, but not like this. 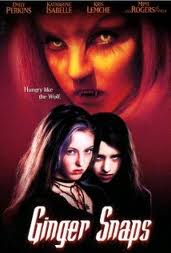 The town of Bailey Downs is dull. Drab in its sameness and uninspiring in its uniformity. In other words a perfect place to breed emo’s, two of whom are sisters Ginger and Bridget Fitzgerald.

The inseparable girls spend their school days lamenting how everything sucks, every other girl is a slut and every guy is lame, and their non-curricular hours faking and re-faking their own deaths, taking photographic – with the emphasis on ‘graphic’ – evidence for a school project.

As you might guess the project isn’t celebrated by their teacher, and the momentary notoriety among their classmates soon passes as the muttered comments of ‘skank’ and ‘freak’ return quickly.

Then Ginger hits puberty and is attacked by a werewolf on the same day. A day that could only be made worse if she found she was to be named President for life of the Shia LeBeouf fan club with no chance of stepping down…

Within days Ginger changes. No longer the resentful wallflower she is instantly confident – cocky even – socially accepted and embracing of her curves and aesthetically pleasing exterior.

Though she has to tape down her tail to stop it from showing. We can’t have it all…

Unfortunately Bridget attains neither puberty nor the ability to howl at the moon. Already the younger and less attractive of the duo, she is even more concerned to see her now extroverted older sister strutting her stuff about like those bitches they only recently loathed together.

She pleads with Ginger to consider the real implications of tail-rocking, everywhere-hair and pet-snacking… but is stared down and told ‘it’s like, whatever, complicated y’know?’.

But as you might expect being a werewolf isn’t all hard biscuits, unstoppable salivation and leg humping. There is also a downside. Boys suddenly like you, however you would rather eat them and eviscerate their flesh. Meanwhile your geeky sister consults the cool stoner down the road who happens to be an expert in all matters lycanthrope, and the full moon is approaching.

For the first hour Ginger Snaps is an entertaining black comedy with great performances from the actresses who play Ginger and Bridget. It moves quickly and while it doesn’t take itself too seriously it is far from a camp Slither-esque silly-fest. Unfortunately the momentum can’t be maintained for the final half hour and change, and it pains me to say that the film ends as these films must, because in truth they mustn’t. They just do because sometimes it’s easier to wrap it up the way everyone thinks it should rather than coming up with something new.

For an hour Ginger Snaps was pretty new, and while I liked the finished product I think it could have been even better.

And don’t try to sell me that ‘allegory for growing into a woman’ crap.

Final Rating – 6.5 / 10. It must be hard growing up as a teenage girl, even harder with a nasty case of the wolfisms. 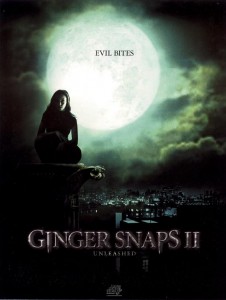 Following up an unexpected, albeit modest, hit movie is hard, especially when you remain low budget and ‘big name actor’ free.

The knee jerk reaction is to either make the exact same film again, or ratchet up the gore and nudity.

Amazingly Ginger Snaps Unleashed does neither, and is all the better for it.

Hard because cutting yourself is pointless now that you heal almost instantly.

Hard when regardless of how often, how thoroughly and how ‘all over’ you shave, you remain as hairy as a Kardashian.

Hard when your only friend is a dead ex-werewolf. The same one who by the way infected you.

Hard when you tell anyone interested the truth about how you came to be this way, and you are the one who ends up in the nuthouse.

Hard when you’re 40kg dripping wet (and hairy) and all you can think lately about it is your craving for human flesh.

Hard when you get hairy palms after just dreaming about self pleasure (in a trippy scene by the way).

Hard when your first visitor in the nuthouse is the werewolf who started all this shit and turned your life upside down in the first place.

If you thought Ginger Snaps was deliberately anti-commercial and low key prepare yourself. Ginger Snaps Unleashed is a slooowwww burn, Bridget is even more gloriously intense and troubled, and the film is even less flashy and showy.

Ginger Unleashed still has the werewolf and infection at its core, but it is not as straightforward as the former film. Where the original was a clumsy parable for the troubles and travails of entering womanhood, Unleashed is far more a psychological thriller, with a few gory scenes and unexpected attacks to keep you on your toes.

Despite the same cast and a similar tone, Ginger Unleashed takes the series in a totally new direction with the more awkward Bridget behind the wheel. The result is not as immediate or crowd friendly, but in my eyes this is a better film overall.

Final Rating – 7 / 10. Ginger Unleashed ignores the sequel playbook in favour of a darker, less accessible psych thriller and manages to not fail in the process. Props for not copping out and not merely settling for a lazy cash-in. 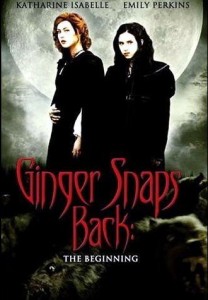 Prequels and origin tales are normally the death knell of a franchise, a sure sign that all original ideas are exhausted or worthwhile characters killed off. But the constantly surprising Ginger Snaps trilogy manages to once again buck the odds and crafts a decent enough sequel/prequel/whatever to justify its existence, even if it is the weakest entry in the series.

Perhaps as a nod to how unlikely a tale this is, the film doesn’t even bother to build tenuous links to the modern day originals, it merely transplants Ginger and Bridget into 1815 America as they stumble through the woods after their ship sinks -taking their parents with it.

After meetings with a portentous Native American woman dressed in red and a strapping young Indian brave, Ging’ and Brig’ end up at a sparsely manned isolated fort, populated with a patchwork group of moustachioed and mutton-chopped old timey types of every variety. (It’s worth stating that in a film with no ‘name actors’ the cast does instead feature many guys who look like ‘name actors. There’s the guy who looks like Bill Macy, another Guy Pearce lookalike and a Native American Josh Brolin, you might be forgiven for thinking that it’s a cast of shoddy impersonators.)

Soldiers, gentlemen, religious extremists and the afore-mentioned Indians are all represented here, low on supplies and morale alike, and desperate also because of what surrounds the fort.

Again ignoring the usual sequel formula of more gore and over-the-toppery, Ginger Snaps Back takes nearly an hour to introduce the first verified furry-sighting. This hour is filled with prophecies, visions, glimpses and implied threats, with the normal residents of the fort plumb refusing to illuminate the girls with the reality of what it is that crouches ominously around the walls.

The film is a little slower and (thanks to the visions and mystical Native American stuff) a fair deal loopier than Ginger 1 & 2. One cool shared vision scene stands out from the rest like dog’s balls as the most worthy few minutes in the film. The remainder is a bit slower and perhaps rides the coat-tails and goodwill engendered by the first two flicks, but even though it is the least of the trilogy it is still quite inventive and tries harder than most other low budget horror efforts.

In isolation Ginger 3 might have vanished without a trace and probably wouldn’t garner a recommendation from many, however thanks to the strength and continual reinvention that the Ginger Snaps trilogy boldly targets I would suggest it is worth a watch so long as you ensure that you check out the two precursors first.

Final Rating – 6.5 / 10. Yeah it’s just a so-so period horror flick with a few decent scenes, yet still a worthy conclusion to the series.

Final Trilogy Rating – 7 / 10. Ginger Snaps is a strange creation, a trilogy with no obvious highlight nor lowlight. An ever-evolving, always surprising trilogy more creative and daring than its peers.

If you watch only one film from the series you may go away nonplussed. You need to see all three to witness the scope and full value of the series.

I suggest if you like your horror that you commit to the five or so hours of your time and give Ginger and Bridget a chance to impress.

While I try to throw a joke or two into proceedings when I can all of the opinions presented in my reviews are genuine. I don't expect that all will agree with my thoughts at all times nor would it be any fun if you did, so don't be shy in telling me where you think I went wrong... and hopefully if you think I got it right for once. Don't be shy, half the fun is in the conversation after the movie.
View all posts by OGR →
This entry was posted in Film, Movie Marathons, Movie Reviews, OGR Recommends, Worthwhile Movies. Bookmark the permalink.