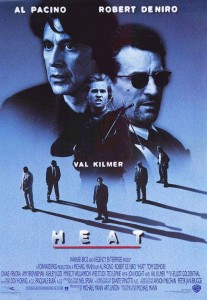 Heat is a rare beast, an action-drama that is just as effective in both respects.

Featuring an all-star cast of big names and more than a couple Oscar winners (even if Portman stole hers) Heat is the ultimate good guy versus bad guy cop/crim flick. Neither guy is absolutely good or bad, and in fact are so similar that but for a break here or there they could easily be in each other’s shoes.

Back to the film: Heat pits a goateed Robert De Niro as Neil MacCauley, a master strategist and criminal who leads a similarly expert and professional outfit of naughty guys as they take on some of the highest risk – and therefore highest yielding – jobs going around. The unit includes Danny Trejo, Tom Sizemore and Val Kilmer, who all have character names but who cares?

MacCauley is very much a “Measure twice, cut once” sort of guy. He is loyal and focused and always looks to minimise risk where possible for him and his guys. He expects nothing less than the same from them also. ‘Mac’ maintains no ties, plants no roots and is generally emotionless, which enables him to move swiftly and easily if under threat. He doesn’t even bother furnishing his own home…

Lieutenant Vincent (Al Pacino) on the other hand is loud and boisterous, he has a loving partner and is passionate about his job. Where MacCauley is the undisputed leader of his team Vincent IS the team, there are other staff around him but it is Vincent who calls all the shots and gives the orders.

The beauty of Heat is that it doesn’t involve the biggest heist in the world, they aren’t driving minis around to be different, no-one is an idiot savant or performs seemingly super-human feats. It is a tale of a group of criminals lead by a very savvy and determined man, being pursued by the law, embodied by the experienced and logical Lt Vincent.

Director Michael Mann builds around this premise with many peripheral characters and potential subplots, some of which are explored and others that peter out. Each primary character has their own influential female figure, even Mac who resents even himself for his perceived weakness. Val Kilmer in particular has issues with his wife (Ashley Judd), who demands bigger scores and uses their own child as leverage in the relationship.

Other subplots include a hothead ex-member of the gang moving around LA drawing unnecessary attention, and a cruel white collar figure looking to pull a swifty on Mac and his fence (Jon Voight).

But at the core of Heat remains Al and Bob – beardy and good-guy. It takes a while but eventually they go mano a mano in a scene that lasts a mere 6 minutes or so, just long enough though to give millions of drama students and movie buffs heart attacks caused by an overload of ecstasy.

Al knows who is planning the crime and where, but not how and when, Bob knows Al is close but can’t afford to stop…

… this all leads to a heartstopping (logical) finale that sees about 84 billion rounds unleashed in the Los Angeles CBD – all resounding and echoing through your lounge room in spectacularly loud DTS sound – in a scene so awesome that it makes all the unnecessary subplots and slow sections worthwhile.

What follows though is a slightly LOTR-esque 25 minutes of unnecessary sequences that tie up loose ends that to be frank weren’t that dramatic to begin with and hardly worth hanging around for. This doesn’t make Heat any less enjoyable I guess, just longer. The 2 ½ running time could have been shaved by 30 minutes without any confusion or loss of effectiveness, but at least it wasn’t like Mann’s last film Miami Vice, where they could’ve cut the entire film and no-one would have been sad.

Final Rating – 8 / 10. Heat features a cavalcade of quality actors and is well plotted. It suffers by being a little overlong and is by no means action packed, but it builds steadily and the setpieces make it all worthwhile, even if it should end where it should logically end.