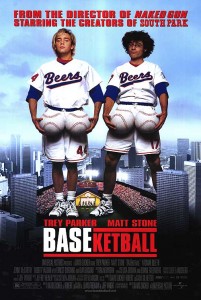 Tells you everything you need to know about the film really…

Baseketball is the bastard child of legends in comedy. The father is David Zucker of Airplane, Naked Gun and Scary Movie fame, the mother(s) are Trey Parker and Matt Stone – better known as the brains and voices behind South Park.

Why point this out upfront? Because Zucker is the typical lazy father, his ‘children’ all exhibit the same formulaic calling cards including stereotypes, profanity for profanity’s sake and bland sight gags. Meanwhile the poor old neglected mothers give their all, throwing themselves into the fray with determination and abandon that only your Mum displays.

After all this is it any wonder that the ‘child’ is confused and… for lack of a better term, decidedly average in every way?

In the near future sports suck. There is no loyalty, no sense of tradition and everything boils down to the almighty dollar. Finally realising that no-one cares about them the fans vote with there feet and suddenly the world of professional sport becomes largely irrelevant.

Faced with this realisation lifelong friends Coop (Trey Parker) and Reamer (Matt Stone) find themselves with nowhere to go. After all they are already unpopular jobless losers with no friends apart from each other. Sport was supposed to be their outlet.

This all changes once they ‘invent’ a brand new game. Apparently a combination of baseball and basketball, Baseketball rapidly sweeps the nation with its so hot right now mix of skill, trash talk and T & A. (Though it’s basically glorified H.O.R.S.E.)

Ernest Borgnine recognises the potential and injects enough capital to bring Baseketball to the people. Then he dies, leaving the franchise – and the fate of the sport – in the hands of Coop…

No point discussing the plot any further, Zucker keeps things a noisy blur throughout with his ADD directing and sloppy chuck it all at the screen approach. Once you get past the premise, the stripper/cheerleaders and the gross outs there is not a lot worth discussing, certainly nothing memorable.

In fact the most notable feature in the film is that ex-Baywatch babe Yasmine Bleeth is perhaps the most sensible and demure character in the entire damn film as the supposed love interest of the two leads. The rest is an inane mess full of gimmickry, cameos and sadly unfunny silliness.

As mentioned above I don’t think that any of the fault lies with the South Park gents, despite the awful goings on around them they are admirably game and self effacing. But it remains a stone cold fact that Team America: World Police is 5 times funnier than this altogether average product.

Final Rating – 6 / 10. My chuckles were few, and mostly resulted from South Park callbacks and a lone song that Parker contributed to the film. As far as the rest goes Baseketball is a far better concept than a movie.