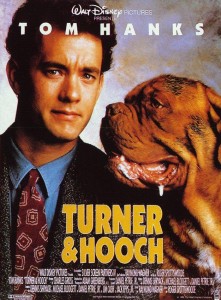 The strength of Tom Hanks is that he can make a film in which he is often alone somehow watchable. Castaway might be the most used example, and The Terminal showed that a man can be isolated even in a perpetually crowded environment, but Turner and Hooch has him playing off against a dog for nearly two hours and managing to be likable and often hilarious.

Hanks plays Scott Turner, a small town 80s cop that is instantly recognisable thanks to his 80s cop suit. Turner is an OCD clean-freak, organised to a T and confined by his sleepy surrounds where the felony drawer is on the anorexic side and a busy day calls for the precinct to make a call just to check if his CB is actually working.

Of course it is inevitable that Turner will be teamed with a drooling, yappy, gassy, scruffy and often vicious animal; Jennifer Lopez…

I mean Hooch, who is suddenly ‘orphaned’ when his owner is murdered. As Turner feels Hooch is likely the only witness – and therefore key – to the town’s only murder in eons he takes the flea-bitten into his immaculately appointed home.

From here the Man Vs Wild bit writes itself as both biped and quadruped vie for the title of ‘house boss’. Turner of course plays the incredulous and fastidious ying to Hooch’s slobbery and destructive yang, with Hanks’ reactions and lectures often the funniest parts of the film.

Around these antics are running sub-plots involving Turner’s handover of his position to new investigator David (Reginald Veljohnson) and his burgeoning relationship with new town vet Emily (Mare Winningham), with the ongoing developments in the key case having the common sense to wait until there is about a quarter hour to run before coming to a head.

I remember Turner and Hooch fondly from the VHS days when a film could get greenlit on the strength of two abilities; likability and watchability. Turner and Hooch might not be an all time classic but it has those two in spades, meaning it stands head and shoulders above many other so-called modern classics that couldn’t hold its leash.

Final Rating – 7 / 10. There are days when I wish that present day Tom Hanks might rewatch some of his 80s flicks and in a burst of nostalgia decide to make more of them. If this stops Larry Crowne 2 from being made then all the better.