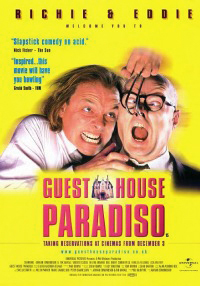 This desire to differentiate is extremely confusing, as the duo essentially play the exact same characters as the other two shows. This subsequent confusion seemed to then spread to the viewing audience, as many decided that they weren’t interested in anything new and stayed away in droves, leading to an about face and a rebranding as Bottom: Guest House Paradiso.

But the ticket buying horse had bolted, and this film was seen by only a precious few. Which is and isn’t a pity, because for better or worse it is simply an elongated episode of Bottom with more swearing, slightly bawdier humour and a whole lot more vomit.

And if that sentence alone doesn’t inspire you to seek this out or stay the hell away, nothing will.

Mayall and Edmondson play the manager and dogsbody of the titular hotel, perched precariously on the edge of a precipitous cliff and immediately adjacent to a nuclear plant.

The hotel is similarly disadvantaged in staff as it is location. But as you would expect it is cheap.

Richie (Mayall) is the pompous smarmy hotel manager, pathetic, delusional and disgusting. His surname is ‘Twat’ – pronounced ‘Thwait’ – though as you would expect it is often said quite differently.

Eddie (Edmondson) is Richie’s gormless and quite possible retarded assistant, whose only vices seems to be alcohol and breaking the fourth wall – something Edmondson does extremely frequently and well.

The duo delight in abusing each other verbally and physically.

Just another day for the boys.

Oh how they like the physical side. An early scene has them both exploded, another sees Eddie have his head run over by a truck – which leaves a mark – among other maladies they are de-nippled, roasted, poisoned and have their nether regions crushed repeatedly in hugely exaggerated fashion.

Among the poor unfortunates who come to temporarily reside at the GHP are Bill Nighy and partner and Simon Pegg (in his first film) and his young family. Richie and Eddie treat everyone as equals, which if you re-read the paragraph above isn’t necessarily such a good thing. It is fair though I guess.

Oh and I seem to remember among the violence, swearing and innuendo was a plot concerning a runaway movie starlet and a misogynistic Italian Prince. And vomit. Lots of vomit.

In truth stretching a 25 minute episode of Bottom is asking a bit much of an audience. There is only so many fart jokes and terrible trouser puns that one can take before they reach capacity, but despite myself I couldn’t help but laugh a few times in the graciously brief 80 something minutes, something that my wife simply could not understand having walked in with around 10 minutes of the film remaining.

But if you can’t laugh at a man releasing a ball of vomit that chases the ‘heroes’ downstairs a la Raiders of the Lost Ark then what can you laugh at? Especially when the cheeks and jowls of the unfortunate vomiter end up in the most logical flappy and distended way possible.

Don’t be surprised if you find yourself offended and grossed out by this film. Don’t be ashamed if you kinda like it.

Final Rating – 6.5 / 10. Guest House Paradiso mines the same depths that Bottom did for years and that The Young Ones did even earlier – though without the occasional genius of that particular series – you like it or you don’t.