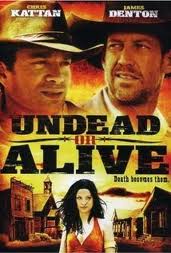 Gee I wonder just how a film that feels the need to inform us that it is a comedy *Cough* ‘Zomedy’, and boasts gloriously fake mo’s, a Sheriff named Cletus and proudly exalts Chris Kattan as its star, will fare?

A bad, flat Wes-tern with gore

Chris Kattan is Luke, James Denton is Elmer, so at least they got the casting half right. There is also a sorta-kinda-hottie playing a relative of Geronimo who makes absolutely no attempt at a Native American accent – which in truth is a relief – this all seems so rushed and lacking in imagination.

The only attempts at jokes were Luke’s naming of his horses and guns and they were uninspired, in one scene he couldn’t shoot for shit – which was supposed to be funny I guess – ten minutes later he’s picking off guys on horseback from distance and no mention is made of it.

Undead or Alive isn’t as bad as others that have filled my B Movie Haiku space in recent years, but it is perhaps the blandest and least ambitious.

When the only element of the film that seemed to show any care or skill was the gore scenes, I acted on a hunch and looked to see if the director was a special effects man making a film in order to spotlight his skills.

The Director’s name is Glasgow Phillips.

He wasn’t an effects man.

This isn’t a film made to spotlight his gore effects skills.

Given the laugh-free zone that is Undead or Alive, if anything that is even sadder. 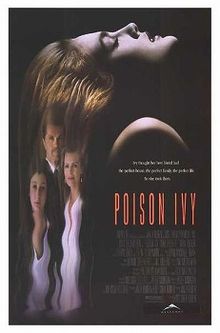 It seems odd that the first time I saw Drew Barrymore’s boobs was 1992. Yet here we are…

First hour is a con-stant tease

She gets ‘em out near the end

OK, let’s make no bones about it. The Poison Ivy films are there for guys to watch to see minor league actresses flash the puppies. (We know they will, it’s just a waiting game until they do.)  It’s just that in this case Drew Barrymore became inexplicably famous after doing so.

Sara Gilbert plays the tomboy-ish Sylvie, Cheryl Ladd the terminally ill Mum and Tom Skerritt the uptight Dad who must be broken.

It’s the usual stuff really, and to cut to the chase there isn’t any real nudity, just a little ‘almost… turn this way’ action that never arrives.

Final Rating – 5.5 / 10. For what it is it’s OK. I never truly understood the allure behind Drew Barrymore, but here she plays the ‘slut who will come in to steal the family’ thing well in a film with a grand total zero surprises. 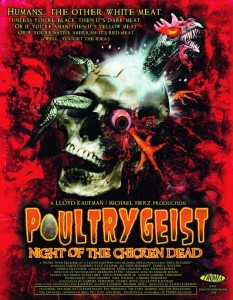 Poultrygeist – Night of the Chicken Dead

Troma is a word that translated from geek language means ‘Quality – but not really’. Over the years they have profited from deliberately and gleefully offending as many people as possible with gratuitous nudity, over the top violence replete with gore and splatter, and concepts that tip-toe so far over the boundaries of good taste that it isn’t worth pointing it out for fear of the inevitable DUH’s that must follow. In some ways they’re like the Michael Bay of movies.

Case in point: the first death in Poultrygeist finds a potential axe-murdering masturbator having his head pulled out of his own anus.

Out of. His head is pulled through his body and emerges at the logical other end.

Despite stuff like this – or perhaps exactly because of it – they have developed a hardcore niche following of 14 to 25 year old males who simply want to laugh at the ludicrous events and see an occasional boob.

But I’d rather that a kid watched crap like this than Hostel and its ilk, because while this might be is patently offensive it is so far removed from reality that no-one could possibly take it seriously for more than a second. And besides, if a kid chooses to take their moral cues from a film about radioactive chickens in a fast food establishment then I feel the issue might have started long before this film.

Think of wrong. Then think wrong-er

Gross from first mom-ent to last

Troma is smart because they know they’re dumb. Instead of whining about small budgets they constantly revel in them. Because they can’t get Grade A actresses to disrobe they get a dozen ordinary lasses to whip ‘em out. A lot.

The two leads in this film might look like an over-eager Shia LeBeouf (unfortunate for him) and a slightly monged Britney Spears but they give their all to entertain in a film where the only certainty was that they wouldn’t need to practice any acceptance speeches. If only so-called Hollywood stars gave as much perhaps we wouldn’t have such a dearth of quality films released each year…

If you’re 18 to 25 – really 14 to 35 – you’ll probably be describing this film breathlessly for months. If you’re over 25 you’ll see the cover, roll your eyes and briefly remember a time in your life when you might have been silly enough to rent it.

I should be in the second bracket, but today I’m kinda glad I ignored common sense for an hour and a half.

Final Rating – 5.5 / 10. Poultrygeist was never going to be a good movie, but it’s a fun little good bad movie.

That’s enough for now, hopefully 2012 will provide so many good films I won’t need to bother with this stuff, somehow I doubt it.

While I try to throw a joke or two into proceedings when I can all of the opinions presented in my reviews are genuine. I don't expect that all will agree with my thoughts at all times nor would it be any fun if you did, so don't be shy in telling me where you think I went wrong... and hopefully if you think I got it right for once. Don't be shy, half the fun is in the conversation after the movie.
View all posts by OGR →
This entry was posted in B Movie Haiku Reviews, Crappy Movies, Film, Movie Reviews, The 7th Level of Suck. Bookmark the permalink.