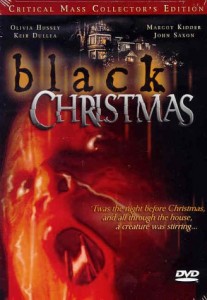 The face you pull when you get the remake by mistake.

Every time a remake is released (which is almost every week) these days I feel more compelled to seek out the source material to see why it needed remaking in the first place, as in 90% of cases the remake is worse or just as lousy as the original.

I never saw the remake of Black Christmas, it looked altogether too teeny for me and I’m not a big slasher flick fan anyway. But I did read something that said that it was a remake of perhaps the first slasher flick, which at least piqued my interest as it is always interesting to see where certain genres originated.

After viewing what is immediately evident is that 35 odd years ago it was apparently unsettling enough to simply set up the kill and then have the killer do the rest. There are no intricate 7 minute “creeping through the halls” or red herring scares here, the victims decide to do something, enter the room in which they will do that thing, and the killer does the rest quickly and in straightforward fashion.

Nowadays to achieve the same result the filmmakers have to build the tension or ramp up the gore, guess which one they normally go for (‘eh Eli?).

The supposed big twist (copied by Scream) is actually made evident in the very opening scene, as we are introduced to “Stalker-Cam” (TM) as someone cases a house from the outside, while a party seems to be going on inside. Said individual then climbs up and into the attic of the house.

It turns out we are in what I think they call a frat-house in the US, a communal dorm for students, in this case all female with a middle aged, seemingly alcoholic dorm mother. The girls are having an end of term party before either heading home or settling in for the Christmas holidays.

The party is interrupted by an obscene phone call, as the girls are all in their late teens / early 20s they put the phone on speaker and have a chuckle. Of course some are offended and others get into the swing of things and actually try to talk back to the caller, but ultimately no harm is done and they hang up, thinking that’s that.

When quite suddenly (to them at least) a member of their number goes missing, they don’t just shrug it off as so many crappy horror movies do today by saying “Oh, she must have gone to the shops” or “She’ll show up”, they treat the disappearance seriously, and as they care for their missing friend so too does the audience care more.

The crank calls keep coming and they keep getting more and more disturbing, I would question why the girls keep listening but it is a movie after all. In between a small collection of bodies builds up, again this isn’t a 73 dead slash fest as many are today and the remaining girls come across all sorts of roadblocks when trying to solve the issue, not the least of which is incompetent police work.

When the ending comes it is in keeping with the rest of the flick, straightforward and basic, and there is no realllll surprise unless you have never ever seen a horror film in your life. What would concern though is the outrageously terrible police investigation that follows that wraps everything up so nicely whilst ignoring so many events and incidents.

Again, this was the 70s, maybe they just didn’t care too much back then about the details.

Final Rating – 7 / 10. You aren’t going to see anything new, but I’d rather watch this than most big budget horror remakes churned out these days.

After my opening paragraph to this review I thought I best have a look to see when the next remakes were to be released and was not surprised to find that in Australia in the next month we have Halloween 2, A Final Destination sequel/prequel?, Sorority Row and on DVD The Last House on the Left.

I love it when I’m right but in this case I hate being so right.