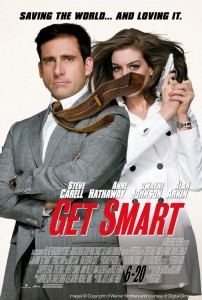 Some cinematic victories are won in the editing room, some after the CGI and effects are implemented, others by securing the perfect director for the project.

Get Smart is by no means a masterpiece, but it manages to be unexpectedly entertaining and likeable. That is because Get Smart is a victory for the casting agent.

Steve Carrell is the only man I can think of that can fill the telephonic shoes of the late great Don Adams, Anne Hathaway similarly is perfect in retrospect as the beautiful, accomplished and exceedingly able Agent 99, the woman who must frequently extract Maxwell Smart from danger time and again.

Without these two leads it is easy to think that Get Smart might have vanished without a trace, though it must be said that the supporting cast are all fine too. But as it turns out Get Smart was sneaky good, the kind of film that you skip in cinemas and DVD, then catch it on TV years later and wonder why you didn’t look it up sooner. The kind of film that won’t win awards, but is easily better than 8 of the last 10 films that you actually paid money to buy a ticket for.

As the film opens Max is a desk bunny, an analyst for good guy agency Control, tasked with sifting through the scads of potential evidence and clues to thwart the evil plans of the nefarious bad guy agency KAOS.

In this film Max is actually quite a good agent and nowhere near as bumbling as the classic TV series, this is in large part his problem, as his superiors acknowledge his abilities yet can’t spare him into the field for risk of losing his CSI-like abilities and attention to detail. (There is also the excuse that up until recently Max was a bit of a fattie and not up to the physical demands of the role, the joke being the flashbacks to Carrell in a fat suit.)

The other field agents treat the hard working analysts with contempt, especially Agent 23 (The Rock) and a couple of field agents who never seem to actually head off into the field…

This all changes when KAOS manages to simultaneously unmask the secret identities of all agents, thereby compromising their safety and the safety of the free world. With a dastardly terrorist plot planned and likely to take place imminently newly promoted Max – Number 86 – and recently plastic surgery (and therefore still anonymous) Agent 99 are unleashed to foil the scheme.

99 resents Max’s elevation to ‘real’ spy work initially, especially when Max actually proves to be a respectable agent, albeit with a few rookie mistakes and rough edges. The search takes them into the heart of enemy territory in Europe, where they must remain undercover to hunt for clues that might lead them to the Mastermind of the KAOS operation and all round evil guy (Terence Stamp).

The jokes fly thick and fast and are never mean spirited or crass, so while the film isn’t hilarious it at least remains likable at all times. Carrell seems born to play slightly nerdish guys and Hathaway similarly throws herself into the 99 role with fearless gusto.

There were a couple of characters too many vying for attention and screentime, which lead to a couple of unnecessary moments and try hard jokes, but with the bulk of the film firmly on an even keel this is forgivable. In essence by remaining true to the core elements of the seminal TV series Get Smart takes the lighthearted TV sensibility and the strengths of the characters and wisely doesn’t toy with the formula. The result might be a tad slow for the teens, but for those old enough to remember Don Adams, Barbara Eden and the Chief, it’s a welcome tonic.

Final Rating – 7 / 10. By no means awesome or life altering, but a funny likable distraction.