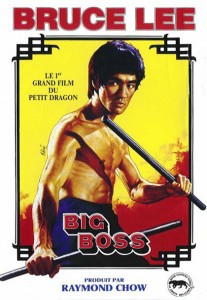 When Cheng (Bruce Lee) arrives at his new home it takes him approximately 90 seconds to meet with his Uncle and for trouble to find him. This is especially inconvenient as for some reason he is sworn to a ‘non-violence’ oath by his family. This difficulty is further
exacerbated when in the following days it seems every second person he meets desperately wants a flogging.

Cheng is staying with several other guys, some of whom are his cousins. (The version I rented had a sloppy dub and not subtitles, so it was hard to gather how many.) Practically all the house-mates work at the local ice factory, which is also the front of more devious business and owned by an especially bad guy who lives nearby.

In the first half of the film Cheng does little despite several fights and ruckuses (rucki?) that go on around him. This despite the fact that some of his housemates come up missing and the clear and obvious injustices that are being committed to his friends and co-workers.

Then, while standing near a scuffle, someone rips his shirt…

Bruce, I mean Cheng manages to squeeze in three fights that stand head and shoulders above the crappy, amateurish fights that fill the first hour or so. Bruce shows speed, power and precision where all around him flail and flub there way to anonymity. There is a reason that Bruce Lee managed to become a household name while millions of other martial arts wannabes have never been heard of.

But the film is undeniably ridiculous and fairly terrible, while my dubbed version didn’t do it any favours in one scene in which a character said “Just you FOUR lousy guys” to a group of quite obviously 6, the acting, fights and plot are all plain bad. Consider also the
moment near the film’s conclusion when Cheng punches a guy clear through a factory wall, leaving a neat man-shaped hole, Wile E Coyote style.

I don’t care how many Bruce Lee t shirts you have proclaiming your love or what a legend you think he is – and I’m not saying you are wrong for a moment – The Big Boss is three decent Bruce Lee exhibitions and 90 minutes of amateur hour.

Final Rating – 5.5 / 10. It pains me to say this, but in the early days Bruce Lee couldn’t find the movie to do justice to his skills.