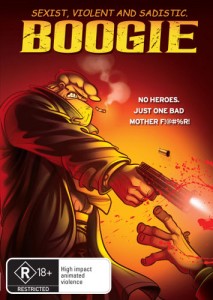 The man known as Boogie in this animated film designed to shock seems pretty proud that he is practically every –ist known to man; racist, misogynist, sexist etc.

As a mercenary Boogie was a highly trained emotionless killer for hire, criss-crossing the globe looking for random foreign people to fill with holes.

Then he ran out of wars.

As an assassin he was equally lethal and cold blooded, only the pay per head was more lucrative. Boogie never turned down a job regardless of the danger, he therefore became the man they called when the job couldn’t be done.

As a lover Boogie is similarly distant and only available to deal on his terms. For some reason this never bothered the lengthy queue of willing women.

Boogie is his own man, an uncomplicated beast with no man or woman as his master, living life – and taking the lives of others – the way he wants to, cops, bad guys, women, kids and dogs, none are spared his violent whims.

As a film though, Boogie is pretty ordinary, especially when you swiftly realise that the extreme violence and reprehensible nature of the lead character are supposed to be the
entertainment.

Boogie is quite short at well under 90 minutes, the action ramping up when the formerly irrepressible Boogie discovers that a newer model of assassin is on the scene, better trained, younger, faster, better equipped and *GASP* cheaper than he. As an F.U. you the system Boogie thwarts the new assassin’s job and decides to protect the intended target, a young waitress with secrets that could bring the kingpin of the local much feared crime syndicate down.

Many films are decried because of the over the top nature of the violence, without it this film would have no noticeable features whatsoever, but after you see Boogie the kid get shot and the cat get fricasseed the quite literal ‘cartoonish’ novelty very quickly wears off.

The promoters of this DVD have cleverly marketed it to viewers looking for the latest in ‘extreme whatever’ by proudly describing the film as “Sexist, violent and sadistic”, for some reason that gets the punters curious – including me – but it doesn’t entertain them for long.

Final Rating – 5.5 / 10. I’m sure this DVD will end up in many an 18-21 year old’s collection, where it will gather dust for a few years before being turfed, with the owner wondering just what he thought he saw in the first place.