A Vampire in Brooklyn (Review) 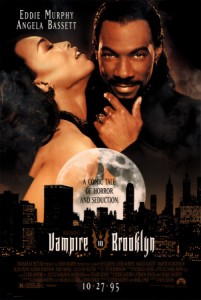 “I am wondering… why I agreed to this film.”

A Vampire in Brooklyn suffers primarily due to four main factors:

Neither man won – or more accurately – both lost.

The end result is a half-hearted (excuse the pun) effort with smatterings of everything and lots of nothing. A film that has no idea what it wants to be and how it might go about getting there. A film bereft of laughs, scares, and ultimately viewer interest.

Murphy plays Maximillian, a smooth undead vampire from the West Indies who must come to Brooklyn for one reason, some vampire poontang that legend has it will help prolong his lifespan.

Upon arriving in the city Maximillian enlists Julian (Kadeem Hardison) as his zombified yet still yappy go-fer ghoul. Their repartee is supposed to provide much of what passes as humour in the film, in truth it is merely a series of lamentable puns (“Put a little heart into it”) and gross out sight gags that often seem out of place.

Max’s romantical target is an already half-vampire (due to some ancestral shenanigans) named Rita (Angela Bassett), a cop with a jealous partner named Justice (Allen Payne).

Despite her instincts Rita finds herself drawn to this pimp looking pointy toothed sleaze merchant due to some unknown connection, but as the legend states that she must give herself to Max via dance the usual “Holla at ya’ Boi” tactics aren’t destined to work for Max.

The film uses the usual vampire rulebook of mirrors, sunlight, mist, crosses and garlic but awkwardly shoehorns jokes on the back of gore and vice versa.

An overrated director and a fading comedian in a relationship doomed to failure, thankfully this genre confusing flop was their only offspring. A sequel was set up that thankfully never came, and Murphy fled back to more familiar territory of cop comedies (Metro) and fart gags (The Nutty Professor). Craven on the other hand started churning out Scream movies one after the other.

Final Rating – 5 / 10. Too little of one thing or the other ends up culminating in not much of anything. A big budget smear on Murphy’s resume.

While I try to throw a joke or two into proceedings when I can all of the opinions presented in my reviews are genuine. I don't expect that all will agree with my thoughts at all times nor would it be any fun if you did, so don't be shy in telling me where you think I went wrong... and hopefully if you think I got it right for once. Don't be shy, half the fun is in the conversation after the movie.
View all posts by OGR →
This entry was posted in Crappy Movies, Eddie Murphy, Film, Movie Reviews. Bookmark the permalink.