Into The Wild (Review) 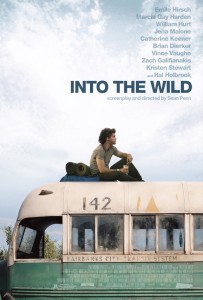 I might not see this film in the same light as many others see it, not because of anything technical, the acting, or the decisions Sean Penn made in adapting and directing. I simply think that the main character isn’t the anti-establishment hero that he is perhaps made out to be, but a young man who let his blind yet admirable adherance to principle rob him of opportunities. Not opportunities to make money or meet chicks or garner admiration from strangers, (but at the same time all three), just a boy who never had the chance to see what he might become.

Emile Hirsch is this “boy”, Chris McCandless, later calling himself Alex Supertramp in a sign that perhaps he wasn’t the mature man he thought he was. I initially found it amusing that Hirsch got this role, thinking almost everything these days goes to Shia Le Beouf, despite the fact that he is yet to be entertaining in anything and in fact is downright annoying in most films he has appeared in, but he still gets plum roles!

The plot is simple because it is a true story, young Chris graduates and instead of following the American Dream and going to college he decides to drop off the face of the Earth and just exist. He doesn’t tell his family, burns his money and trashes his car, so why does he keep his clothes and other possessions?

Surely roaming naked and free through life is the purest one can be? Also if Chris is such a fan of the environment and is in a position to make a difference with his passion and superior intellect, why does he then ignore that opportunity and remove himself from the system?

Regardless Chris and his clothes head off and just slum through life for the remainder of his, picking up odd jobs here and there and interacting with various locals and fellow drifters with the main aim of going to Alaska by himself with only his wits to protect him. There are many flashbacks to various parts of the last years of Chris’s life for obvious reasons, as the final stages have a despairing sense of inevitability about them and they would even be more depressing if allowed to run their course.

Hints are given to Chris’s decision making process by flashbacks involving his family, who while well intentioned appear to have high expectations as a minimum for Chris’s future, which is an outlook I’m sure many parents would share. Given the fact that this is a screen version of real events a subtle variance in their demeanour could alter the viewer’s perception significantly one way or the other. I would think the director might be prone to wanting a less forgiving view of the parents to further justify the actions of young Supertramp, as that is more romantic than the notion of a young bloke with a promising future dissing his parents, burning his cash and changing his name to Alex Supertramp.

Once in Alaska Supertramp finds the Magic Bus, a deserted shell of a schoolbus that serves as shelter and home. While there he uses his accumulated knowledge and smarts to exist, though he becomes unkempt, unshaven and most alarmingly malnourished, and again it is more and more evident that there will be no happy ending.

Supertramp has undeniable charm and the allure that rebels seem to garner, but the movie is kept alive by the many bit parts of those he comes into contact with along the way. Vince Vaughn plays an employer that sees what Chris has in store and vainly tries to talk him out of it. Catherine Keener and Brian Dierker play a middle aged hippie couple that are cruising through life without ever really truly roughing it, and most notably Kristen Stewart plays a young teen who would be Supertramp’s love interest if he wasn’t jest so damn principled!

I have scanned a few reviews when I saw that on imdb this is one of the Top 250 all time rated flicks, and while I don’t disagree that this is a fine film I can’t see where the extra point or so comes from. Into the Wild is a sad film, as Supertramp left the security of home to find himself, and overreached his abilities to tragic effect. It is worth noting that despite all the romance and high mindedness of young Chris McCandless the note that was actually left on the Magic Bus where his body was found was a desperate SOS message, not a noble statement of belief, it is amazing that a couple of minor decisions in editing and direction can perhaps elevate a tragic story into one of martyrdom.

Final Rating – 7 / 10. A fine film involving tragic subject matter made specifically to lionise Chris McCandless. Hopefully if nothing else it inspires someone to pause for thought before venturing out, rather than sending other young people on a misguided adventure to find themselves.