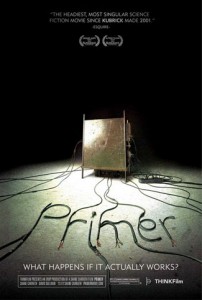 There are a great many scientists and researchers conducting amazing and convoluted experiments daily, attempting to cure any number of diseases and viruses (granted there is probably just as many trying to create the newest boner pill and weight loss drink, but whatever).

Most will fail. This doesn’t mean their efforts aren’t noble or worthy of praise though.

Sometimes the effort and the intent is more admirable than the outcome.

Such is the case with Primer, the most independent and low budget of independent, low budget films – try $7,000 and a Director/Production Designer/Casting Director/Writer/Lead Actor on for size.

Try as I might (and admittedly that wasn’t too hard) I cannot explain with certainty just what happens in this film. Even if I wanted to go into spoiler-filled detail you would likely still leave confused, but there are a million films released each year that exist only to exist, they rarely excite and provide more than fleeting, ephemeral release beyond a laugh or a gasp.

Primer at least tries to take sci-fi in an intelligent and entirely new direction.

The film opens with four garage scientists working on a shoestring budget, trying to have their continued research furthered by mailing out funding requests. As time passes – at a lean 70 minutes there are no lengthy monologues or segues here – we watch on as the young men cadge parts from their day jobs, motor vehicles and household appliances. Adjusting, measuring and noting any differences and impact to the box-like invention, without ever giving the viewer a clue as to its purpose.

We eventually realise why. It doesn’t have one. Not a tangible reason to exist anyway. A slow growing protein that inexplicably grows exponentially quicker is the catalyst (isn’t it always?), seeing their future selves walking around is the proof…

It becomes apparent to Aaron and Abe that whatever it is, it represents a discovery of some kind beyond any reasonable expectations. Something important enough to cut the other two guys out of the loop while they conspire to give their invention a direction, after all four shares divided by two works into bigger numbers.

After much whispered conversation and subtle tinkering the ‘thing’ outgrows both their dreams and the garage. A storage unit is rented. Lockable and above all discrete.

I will not ruin the surprise that in truth I only partially understand, but time travel is at its core.

Abe and Aaron continue their ponderances and experimentation. They are forever asking themselves and each other the questions that we may ask, only without any clear and easy answer. This leads to me wondering if they don’t know what is happening, how can we be expected to grasp everything?

In truth the explanation and a great reveal is forthcoming even if it might just lead to more questions. I can easily see how those that kill time watching movies, as opposed to those who watch films to be challenged and engrossed, might switch off, but Primer is way more than the arty kid with the calculator in his pocket showing off. It demands that you listen and pay attention. And doesn’t backtrack to pick you up if you fall off at any stage. But for those that hang on and are tenacious enough to follow the trail of breadcrumbs it is one of the more exhilarating films to be released in a decade, despite not having a single car chase, fistfight or random moment of Salma Hayek nudity.

I still don’t understand elements of Primer beyond the ‘gist’, anymore than I ‘get’ pieces of fine art. Someone claiming to have made art because no-one understands it is often the cop-out for the lazy and untalented. That said I don’t ‘get’ Primer, but I know enough to know this is no hack brazenly demanding to be elevated to fame and fortune on the back of a rough sketch of a crumpled Coke can.

Final Rating – 8.5 / 10. Primer is undeniably creative and indisputably ambitious. For that I will do more than merely admire it from afar in confusion.

I stand here to acknowledge its greatness, and I suggest you give it a shot – and an open mind – too.

P.S. Someone throw a bucket of money at Shane Carruth, the man responsible for almost everything that appears on screen. If he can make this with $7,000, imagine what he might achieve with SEVENTY THOUSAND DOLLARS!!!