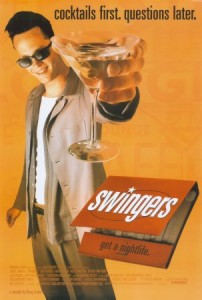 Here is a movie that almost made me feel sorry for actors, those poor guys who receive praise and adoration from total strangers, gifts and concessions from wealthy ‘wellwishers’, and tens of millions of dollars annually out of our collective pockets.

But Swingers doesn’t deal with your Tom Cruises or James Francos, it deals with guys n gals lured to Hollywood only to find they are better suited to roles as ‘onlooker 3’ and handing out flyers while dressed as a hamburger.

Still, not my fault they ain’t pretty enough…

What Swingers did manage to do better than almost every film in recent memory is to coin an entire vernacular that sounded both fresh and ridiculous at the same time, guys calling people ‘money’ incessantly and sounding like they are chatting each other up instead of merely conversing should be silly – and is – but it never seemed cooler.

Of course in reality such conversations can only be held with other people who have seen the movie (otherwise they think you’re insane) and furthermore only for a day or two afterwards, which should be a word of warning to those who still say “Ohhh behave!” in their best lousy Austin Powers voice.

Swingers follows a small group of aspiring wannabe hep-cat actors as they futilely traverse the LA landscape seeking work, recognition, networking contacts and of course fame. And beautiful babies. Always the beautiful babies. But as alluded to above, not everyone walks in as Brad Pitt the movie star, there are hurdles and roadblocks for the unprepared and ill equipped.

The two primary leads are Mike (John Favreau) and Trent (Vince Vaughan), neither are ‘IN’, though both handle this reality in extremely different ways. Mike is convinced that he never will find the fame and recognition that he craves,Trent on the other hand simply acts like he already is famous and recognizable in a kind of ‘live the questions and you will come into the answers’ headscratcher.

Mike is short, a little dumpy, generally self deprecating and softly spoken,Trent is tall, good looking, slick and constantly talking loudly to anyone who’ll listen – even if they don’t want to.

The film essentially follows these two and a couple of hangers on through three nights. The first finds Mike and Trent heading down the road to Vegas in an attempt to lift Mike’s sagging spirits as he is both disenchanted with his lack of forward momentum, and pining for the girl he left back home (who to his chagrin has latched on to another man).

The initial sequence neatly introduces the two characters and neatly displays the chasm in their respective personality types.Trent is insanely confident even in the face of much evidence that suggests he might not have just cause, and Mike is so vulnerable and insecure that a potential hook-up quickly turns into his own personal pity party.

The second night sees the duo and a few friends heading out on the town back in LA. This sequence highlights more the image driven nature of Hollywood and those that desperately yearn for fame. No-one ever says what they mean, no-one is ever happy or content, and no-one really pays attention to anyone beside themselves lest they get their precious feelings hurt.

It is during this night that Mike has a minor victory that swiftly turns into a morale crushing and confidence sapping personal catastrophe, in a scene that anyone who has seen the film would recognize as the ‘answering machine scene’.

Then they cringe and purse their lips…

The final night you will have to see for yourself, suffice to say I urge you to seek this film out if you have not already, because a film about a bunch of guys who are already operating in an alternate era when the film starts can hardly then be accused of becoming dated. Swingers is worth watching for many reasons, it is fresh, fun and funny, the language I have already spoken of but it must be heard to be believed, and if anyone ever wondered why a fat, passionless and annoying Vince Vaughan keeps getting work it can only be because Hollywood casting agents have this DVD in their collections, as he has appeared in precious little of value since.

In Swingers though he is a whirlwind of energy and self confidence, a jive talking image conman who is unbelievably and instantly repellant, but equally as hard to stop watching.

Final Rating – 8 / 10. Without Vince Vaughan Swingers is a 6 – just another movie with a couple of chuckles – with him it becomes a unique character driven film that is worthy of attention.

Rewatch this film Vince, and sort yourself out, cos Couples Retreat ain’t gettin’ it done.