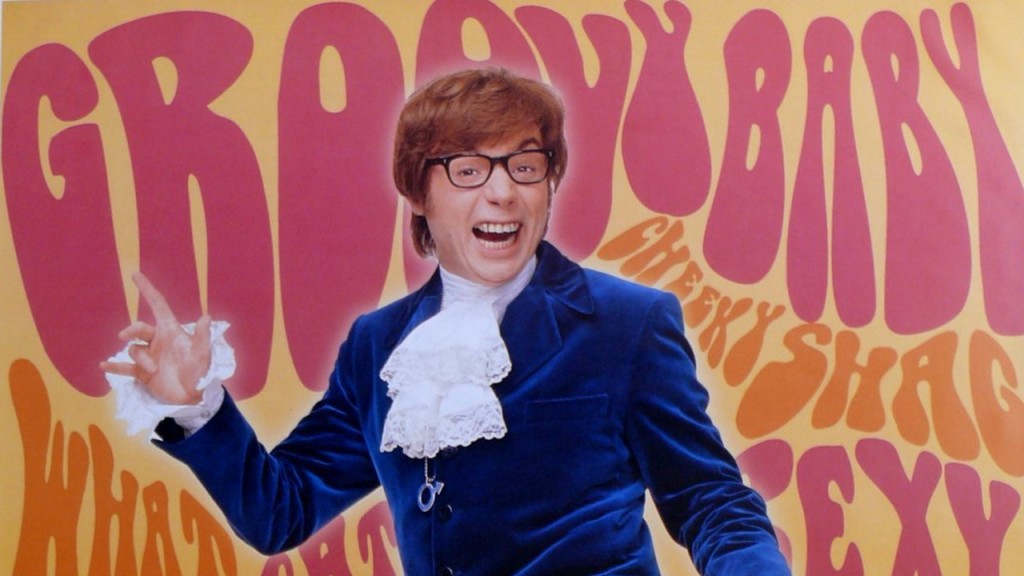 I’ve been watching a bunch of trilogies, quadrilogies and… other things ending with ‘ilogy’.

Some, like The Mummy, Child’s Play and the Friday films, take a premise and beat it to death without care or creativity.

Feast doesn’t even have a premise.

But few maintain the level of quality throughout the series, unless of course that level is very low indeed.

Saturday Night Live graduates have a fair to middling success rate with their cinematic output, for every Will Ferrell and Adam Sandler success story – at least in box office terms – there are countless Spade, Schneider and Kattan’s laying dead by the side of the road.

Mike Myers is perhaps the most creative SNL team, at least in terms of characters and premises, and while Wayne’s World 1 & 2 were both very good it is the Austin Powers series that he will forever be linked to.

Chock full of catchphrases and colourful characters, the films are essentially skits draped over a threadbare Bond lampooning plot – the difference being that the Austin Powers films are mildly entertaining.

Describing plot events in laborious detail seems pointless. Regurgitating the film’s many catchphrases lazy and annoying, so the following will be brief. 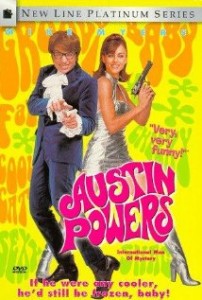 Like Wolfmother Austin Powers is a throwback to another time when Britain was the centre of the cultural universe, unlike the band though Powers isn’t a pretentious money hungry douche, but a genuine 1960s swinger transplanted into another time, the 90s, where his free love and laissez faire attitude to personal hygiene place him at odds with the modern day ‘squares’ of the time.

Unfortunately Powers’ nemesis, the Evil Doctor Dr Evil, has taken the liberty of cryogenically freezing himself for three decades to rid himself of Powers’ interference, thawing himself just in time to wreak havoc on an unsuspecting placid and naïve USA.

Desperate times call for desperate measures, so Austin is unfrozen to capture Dr Evil and his cronies, only to find that his ‘everything is cool’ shtick is at odds with this strange new world.

Mike Myers plays both Powers and Evil, and later on many other characters. His fingerprints are all over this series, the impromptu street dances, the clever wordplay and witticisms, the broadly drawn characters and general sense of fun make the films likable even if you don’t care for the jokes – and there are so many of them that you can’t help but chuckle at some of them.

Cameos abound, from musicians randomly appearing to croon away to name actors taking bit parts to poke fun at themselves and join in the sillyness. Though the cameo names get bigger as the series goes on (and everyone wants in on the action) even the first film has Tom Arnold, Robert Wagner, Will Ferrell and Seth Green – though I should have probably left Seth off that mini-list given that if it weren’t for this trilogy he would likely not have gotten Family Guy, which would mean no Robot Chicken, or *SOB* no ‘Without a paddle’ (a film I actually haven’t seen but I am positive it must be great…)

Liz Hurley takes a break from being boned by the rich and unfortunate to prance about a bit and prove just what a walking charisma free zone she is, Michael York plays the straight authority figure and a bunch of other guys all take turns at out-hamming each other in their brief roles.

Final Rating – 7.5 / 10. Like Austin himself the original film is just so innocent and playful that it is impossible to hate, but more than that it cleverly sends up the Bond series, the genre most worthy of sending up with a never-ending barrage of one-liners, cheesy comments and puns so lame you would be silly not to laugh at. 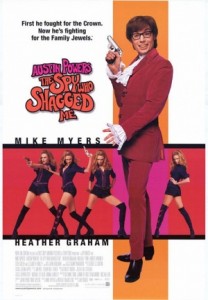 Austin Powers – The Spy who Shagged me

A mere two years after the original film nestled warmly in the commercial bosom of the mainstream, Austin 2 hardly tries to reinvent the wheel, but it does want to get it sponsored.

This time Austin has had his mojo stolen, rendering his sexual magnetism decidedly un-magnetic, and bringing him back to the field in terms of both the spy game and as a lady-killer.

Liz is out this time, with the slightly more tolerable Heather Graham off the bench. Rob Lowe is back as a younger version of Robert Wagner’s character and Tim Robbins is the President of the USA this time around.

One thing saved this film from lazy-sequelitis: Mini Me, a smaller cloned mute version of Dr Evil, constantly by his side and mimicking his every move. Mini Me was funny to almost everyone, and too cute to bear for most women, despite the fact that if you passed actor Verne Troyer on the street you would risk getting hit by a car to get away from him – even if he were regulation size he’s still one creepy Russian doll.

The rest of the film is a familiar blur of joke chains, awful punny names and ridiculous situations, with the attempted three (plus a million) point turn and the family reaction to the death of a minion particularly inspired.

Austin 2 sports all the same characters from the first film with Mini Me and the disgusting and obese Scottish heavy (pun not intended) Fat Bastard (I think that one was) actually enhancing the line-up.

Final Rating – 7 / 10. You’ll laugh. You’ll gasp. You’ll wonder for just a second if you’ve seen it all before. But you ultimately won’t care because it’s still fun. 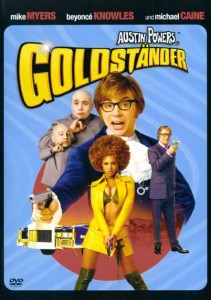 Any doubts that the third in the trilogy is a lazy cash-in are dispelled in the first seven minutes, which remind us of everything that made the first two films so good. It’s all here, a brilliant action scene spoof, a spontaneous dance number, dumb jokes, unnecessary cameos, product placement, fake names and an exploding Britney Spears Fembot.

What more could you want?

In this case the answer might be continued momentum, because after the breathtaking opening sequence the film rapidly runs out of steam.

Having Michael Caine appear as Austin’s estranged father is a great move, everything else about the film is unfortunately not.

With Austin’s dad reappearing just in time to be kidnapped by a fiendish disco and gold -obsessed Dutchman – working in cahoots with Dr Evil *Natch* – Austin has no choice but to team with Foxy Cleopatra, a stereotype of stereotypes, to rescue him, and hopefully rebuild the fractured relationship in the process.

It seems that even Myers was tired by this point, the Dutch AU-loving Goldmember is perhaps his worst character this side of the Cat in the Hat, his running ‘jokes’ being his passion for scratching, picking and eating his dead skinflakes, his gold-tinted hotpants area and his dopey accent.

But as far as flawed villains goes at least Goldmember is no Foxy Cleopatra, Austin’s sidekick this time around is as boring as she is hot – and I love me some Beyonce. It’s just that here her character gets zero laughs, so her entire role becomes an ever-changing array of hairstyles and outfits that highlight her long legs and nice abs. Surely a 3 minute filmclip can do all that without the bad jokes? And I can mute the music too…

Final Rating – 6.5 / 10. With no new inclusions of merit and fewer jokes, it takes more than a gold-plated roller-Dutchman to save this from obscurity. On its own Goldmember might be an amusing curio, but it suffers mightily in the shade of the first two Austin Powers flicks.

Final Trilogy rating – 7 / 10. It’s hard to even name another comedy trilogy worthy of recommendation. (By all means, prove me wrong folks.)

Mike Myers deserves credit for doing what Will Ferrell never bothered with, he creates wildly different characters with nuances and quirks amid the broad sweeps and more outlandish traits rather than lazily trotting out the same Will Ferrell mannerisms vomited from under a new wig. A large part of the charm of the Austin Powers films is that they are just out to have a laugh and a bit of fun.

While I try to throw a joke or two into proceedings when I can all of the opinions presented in my reviews are genuine. I don't expect that all will agree with my thoughts at all times nor would it be any fun if you did, so don't be shy in telling me where you think I went wrong... and hopefully if you think I got it right for once. Don't be shy, half the fun is in the conversation after the movie.
View all posts by OGR →
This entry was posted in Film, Movie Marathons, Movie Reviews, Worthwhile Movies. Bookmark the permalink.