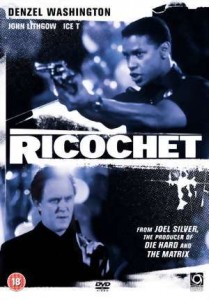 Don’t worry, the movie isn’t as bland as the poster.

Nick Styles (Denzel Washington) is an ambitious up and coming policeman studying law with an eye on entering the legal system sooner rather than later.

His big break occurs when another similarly ambitious man – albeit in another field of endeavour – transgresses the boundaries of the law directly in front of Nick, and more tellingly a man holding a video camera. The ensuing media coverage makes a minor 80s viral star of Nick, allowing him to rapidly advance into the offices of the District Attorney, while simultaneously ending the fledgling criminal career of one Earl Talbot Blake (John Lithgow).

Blake stews in his own juices in prison for years, allowing his grudge against Nick to become an obsession. An obsession that is not helped by the frequent media coverage his more popular nemesis continues to garner.

Blake formulates an escape / vengeance combo that is as impossibly convoluted as it is (apparently) embarrassingly easy to pull off. After his daring and bloody escape that leaves many dead – according to the authorities Blake among them – he easily and painlessly infiltrates Nick’s family, career and inner circle within mere days, somehow managing to turn Nick from a local law abiding hero into a pariah wanted by the law, hated by the public and mistrusted by his own friends and family.

Lithgow has a ball as the profane, violent and intense Earl Talbot Blake, some of his disgusting statements and retorts are blackly quotable, and his over the top mannerisms and facial gestures are so serious they’re hilarious. Denzel too allows himself to get a little dirty, he swears up a storm and even though it is not his intention manages to bang a hooker and ingest a powerful cocktail of illicit substances, all in the one scene.

Having Ice T around as a smack talking ne’er do well just adds flavour to proceedings, and Kevin Pollack gets to try a couple of his character impressions as Nick’s former partner and best buddy.

Ricochet is violent, silly, implausible and somehow absurdly entertaining. It is over the top in all the right ways, stopping short of Crank level histrionics, but thankfully going a lot further than many of today’s PC influenced sober snoozefests.

Final Rating – 6.5 / 10. I can’t say that it is that great a movie, but you’ll never be bored, and the film pulls out all the stops to hold your attention, even if for much of the time your eyes are bugged and you are mouthing ‘Really?’ incredulously.

I liked Ricochet as a gormless kid in my late teens, I am pleased to say I enjoyed it almost as much today, but perhaps for slightly different reasons.

While I try to throw a joke or two into proceedings when I can all of the opinions presented in my reviews are genuine. I don't expect that all will agree with my thoughts at all times nor would it be any fun if you did, so don't be shy in telling me where you think I went wrong... and hopefully if you think I got it right for once. Don't be shy, half the fun is in the conversation after the movie.
View all posts by OGR →
This entry was posted in Denzel, Film, Movie Reviews, OGR Recommends, The Grey Area. Bookmark the permalink.