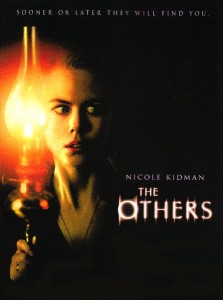 “Shhhhhh! Listen! Has the cheque cleared yet.”

Before I yammer on about The Others, let’s first discuss the career of one Nicole Kidman, who I consider the most over-rated actress on the planet. Sure she is attractive in a “Womanly” way, as opposed to the million “girl” actresses that burst on the scene and vanish seemingly weeks later, but her decision making when saying yes to a movie is obviously abysmal.

Thanks to imdb I can say that these are Kidman’s career highlights:

– Dead Calm (My initial typo said “Dead Clam”, which I hope to option and sell to Hollywood for a million bucks.)
– The Others

That’s it. I’ve seen at least a dozen of her other flicks and have been underwhelmed every time. Kidman is good-looking without having that one “thing” that you remember, a good actress without ever being the most interesting character in any movie that she is in, yet she is critically lauded and extremely well paid.

Another thing: I am Australian and realise this is almost slanderous that I am fully bagging a fellow Australian success story, but it needs to be said that NICOLE KIDMAN IS INCREDIBLY OVERRATED.

Late addition: I subsequently checked out Rotten Tomatoes and found that Dead Calm and The Others are 2 of her higher ranked flicks, followed by Eyes Wide Shut, which I have seen but thought was nowhere near as good as it was made out to be.

So back to The Others, which after my rant is actually pretty good, more thanks to the simplicity of the story than anything Kidman does though.

Set in post-WW2 on a British island, Kidman plays a mother of 2 young kids named Grace living in a massive isolated manor that is seemingly eternally surrounded by fog. Her husband Charlie, was a soldier in the war and hasn’t been heard from for some time, perhaps already dead. Her 2 kids are around 4 and 7, the younger a boy named Nicholas and the older a sister named Ann. Grace is understandably very protective of her two children, who apparently have an allergy to natural light, read sunshine, and must remain indoors during the day and behind thick drawn curtains. In fact Grace locks every room behind her to make sure they don’t wander out, something that is a bit of a contrived plot device in retrospect.

So one day three strangers roll up unannounced at the front door, Grace assumes that they have answered an ad offering work and employs them all instantly.

Grace explains that her previous help vanished, and she takes great pains going through the rules regarding her children to Lydia and Mrs Mills.

So one day Grace hears a crying child and immediately assumes it is one of hers. Nuh-huh, they are both OK. Ann blames some other kid named Victor who Grace has never heard of so she punishes Ann for the percieved lie. After mutterings, random noises and scuttling upstairs, it seems evident that someone else is in the house, and after questioning Ann matter of factly explains that there are in fact 4 others including the afore-mentioned Victor.

Of course Grace being proper and rational initially doesn’t embrace this idea, only as the usual evidence of – self closing and opening doors, footsteps, unmanned pianos that play and random voices sorta changes her tune somewhat. She demands that the three servants search the home and grounds for evidence.

A bit of an odd turn of events happens about half way through that I won’t ruin (though it makes little if any sense), Grace decides to go for help through the fog, but ends up becoming disoriented and lost, until she finds…..

Again I can’t say, but it does seem that the hired help know more than they are letting on, and that again someone else is in the house. Aside from Mrs Mills, the help seem to be around more to give the audience and Grace someone to be suspicious of, as elsewise she would be largely jumping at shadows.

The Others finishes with a decent turn of events that makes sense given what precedes it, but unlike The Sixth Sense it does not reward repeat viewings for some reason. I had far fonder memories of this film from when I initially saw it in the early part of the decade than after watching it the other night. In essence I realised that it was a film with one scare, that wasn’t really scary anyway, and two revelations that are both OK, but once you know ’em you know ’em. There is little joy in revisiting this flick.

It does contain one of the (inadvertantly I think) funniest lines in film history. Grace is once again seriously discussing things with her kids and in an attempt to comfort Nicholas says:

Dunno why, but it cracked me up enough to rewind it twice.

Final Rating – 6.5 / 10. This is worth seeing the first time, but if you’ve seen it before don’t ruin any positive memories by watching it again.