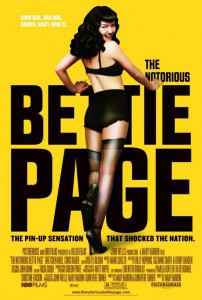 The camera loves ya baby.

The Notorious BeP reeks of being another gussied up biopic with largely fabricated events or versions only included to justify making the film in the first place. In fact were it not for the nudity I can see little memorable or notorious about this film at all – the same might be said for Ms Page herself.

In the 50s America was quite a repressed and puritanical place, and despite all the subsequent changes in attitude and understanding every current affairs show still seems to inform us that this is still the case today.

Everything from now should be read with the following lead off sentence: “According to the film…”

… a rushed marriage failed when her husband treated her with disdain, and often violence.

… Bettie decided a fresh start was in order and moved to New York. She enrolled in acting classes but when success – and cashflow – wasn’t immediately forthcoming a random request to model by a photographer lead her into the industry.

… Page’s innocence meant few inhibitions, and this carefree attitude to nudity – and a beaming smile – lead to more popularity both from readers and lensmen, which in turn created more offers from more varied sources.

… these “varied sources” end up being fetishist stuff including bondage and high heels. Bettie (apparently) adopts the “what the hey” attitude and embraces these new fads, giving her all to photographers, even if she didn’t understand what people saw in these bizarre new trends. 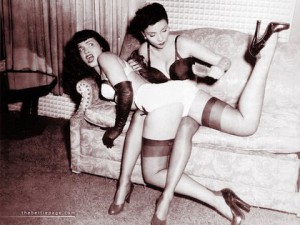 …even though she didn’t think she was doing anything horribly wrong, Bettie still didn’t give full disclosure to her own family.

…one day a non-industry person opens up and gives Bettie the real public opinion on her antics.

… Bettie is confused. After all, she never meant to be Notorious.

Look the film seemed to me to give a fairly favourable account of Bettie’s life and supplied a bunch of alibis and excuses, more or less saying she didn’t choose the industry, it chose her. Gretchen Mol is effective as portraying Bettie as somewhat innocent and likable – even if remaining oblivious to what everyone thought for years seems improbable – and yes Gents she does get naked a few times for brief periods.

Similarly as the filmmaker (at least to me) seemed to think making this film warranted excising any sense of Bettie selecting her career path – there are hardly any “bad eggs” to be found in an industry that must have been quite seedy and underground even a lifetime ago – thereby claiming the “nice girl who didn’t know any better” card, I can hardly call it compelling or interesting viewing, but a sanitized version of what actually might have a happened.

Final Rating – 6 / 10. For a film begging for notoriety in its very title, and pertaining to the life of a nude and fetish model, this is tame… and flaccid, stuff indeed.