Righto, before we get to their ascension, let’s look at the first poorly judged attempt to re-boot the franchise that was so flawed that it took a mere decade to pass before the reboot was rebooted. 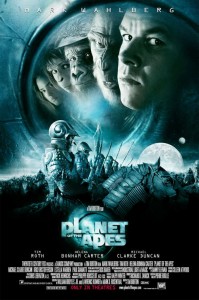 Believe it or not this tale of a time-traveling astronaut faced with a civilisation ruled by super-evolved apes in an alternate universe is director Tim Burton’s most straightforward film yet.

Leo Davidson’s (Mark Wahlberg) love for his monkey impels him to pursue it through a space anomaly that propels him forward thousands of years. Leo finds himself on a new planet inhabited by various types of monkeys, all highly evolved and English speaking, which is a plus…

But they aren’t alone on the planet. The jungles and remote areas around the monkey settlements are rife with humans, some more opinionated monkeys say ‘infested’. Almost immediately upon landing on this new planet Leo is captured and bundled in with various other newly nabbed humans to be taken to Monktropolis (not really but it should’ve been) to be onsold to others.

This is where Leo learns of the basic role reversal that this particular ‘planet of the apes’ experiences. The undisputed rulers of the land are all hairy and like bananas. Depending on their background or upbringing they all deem the humans as potential equals (best case scenario), slaves and house help (middling) or vermin to be exterminated (worst case).

The obvious parallels between the current human / animal relationship is constantly and often clumsily highlighted, leading to 127 too many ‘tee-hee, they’re just like us’ moments.

After introducing the few main monkey characters including ruthless army leader Colonel Thade (Tim Roth), a slave trading orang-utan played by Paul Giamatti and his human friendly daughter Ari (Helena Bonham Carter), Davidson and a few humans escape from captivity and with Ari in tow head to the badlands, hoping to find answers to questions that needn’t be asked. 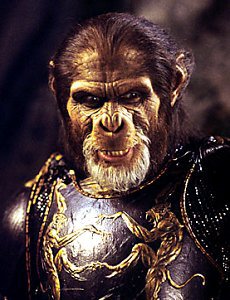 The last hour or so in this uneven two hour monkey-fest descends into a straight up actioner, and not necessarily a good one, the ‘twist’ ending straight up sucks and is likely the reason that a sequel wasn’t even considered, and Burton shows that as a story-teller he does great visuals.

Speaking of visuals, the sets are all immaculate and lush, the monkey makeup is for the most part excellent – especially Tim Roth – and the costumes are all well made, the CGI was wisely limited given the limitations of the time and doesn’t stand out too much for the wrong reasons.

But all the above merely makes Planet of the Apes an immaculately presented, well acted confusing and frustrating effort. After taking so long to ensure that Thade is the bad guy he is never called upon to do much with all his pent up rage and evil, and just why a monkey driven civilisation is such a bad thing is never addressed.

After all, lying around scratching yourself and eating is hardly the worst way to go is it?

Final Rating – 6.5 / 10. A couple of decent scenes and some creative visuals can’t overcome a bland and often lost plot. Tim Burton does ‘oddballs in outfits’ better than most, not this time…