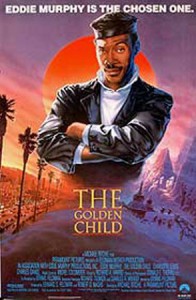 His secret power is in his hat.

When the only truly pure being on Earth is taken by a Demon and his bizarre, circus freak troupe of minions from the holy place where he is being raised who you gonna call?

In this case Chandler Jarrell (Eddie Murphy), a private investigator who focuses on locating missing children while wearing ridiculous hats.

But Chandler sez “No” when initially asked by the exotic-hot Kee, who is working on behalf of the Tibetan forces of good – some business card that would be.

“No matter”, she replies, “You are already on the case”. So Na-Na to you Mr Jarrell. 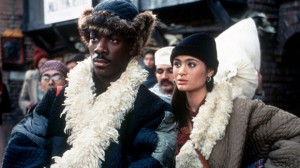 The finders of missing children.

Jarrell is fast talking, hip, and irreverent but well meaning – in other words everything that summed up Eddie murphy in his “relevant” phase, which ended around the release of Boomerang when Murphy got all serious and introspective and shit.

Kee on the other hand is poised, deliberate, sombre and calm, but surprisingly well equipped at unexpected times – and I’m not just referring to the scene where she gets her white blouse soaked for no good reason… well two good reasons.

After the two team up the trail takes them to the lair of a bikie gang, then Chinatown where they meet Kala the Oracle (of sorts) who informs Chandler of the magnitude of his quest – being that he is the Chosen One after all… 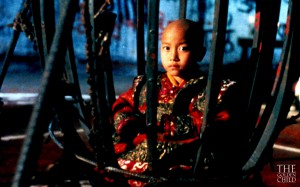 Chandler also learns that the Golden Child is a once in a thousand generations birth, born specifically to rescue humanity, capable of restoring life with a touch, wise beyond reason and with the ability to make a Pepsi can dance to classic 1950s songs… 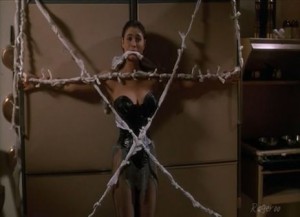 Hey we had the same dream!

There is a cool oddball dream sequence and a trip to Tibet to obtain the sacred dagger that can free the imprisoned Golden Child, and a pretty hilarious scene where Chandler and Kee have to bluff the airport security to escape from Tibet.

When finally meets his nemesis Sardo Numspaa (Charles Dance) formally to discuss the dagger for child swap things heat up, before a good quickie 80s finale in which everything builds to a crescendo, the figureheads of good and evil have a showdown and all is resolved in about 6 minutes.

Perhaps The Golden Child doesn’t move quite as fast as films do today and the FX – which were pretty cool in the 80s – don’t hold up quite so well now, it is fun and enjoyable while it lasts and also has a few quotables, including “One of her ancestors was raped by a dragon”, which is a line you don’t hear every day.

Final Rating – 7.5 / 10. Not often listed among Eddie Murphy’s highlights, but The Golden Child is a very solid and worthwhile – if a little dated – relic from the 80s.

While I try to throw a joke or two into proceedings when I can all of the opinions presented in my reviews are genuine. I don't expect that all will agree with my thoughts at all times nor would it be any fun if you did, so don't be shy in telling me where you think I went wrong... and hopefully if you think I got it right for once. Don't be shy, half the fun is in the conversation after the movie.
View all posts by OGR →
This entry was posted in Eddie Murphy, Film, Movie Reviews, OGR Recommends, Worthwhile Movies. Bookmark the permalink.