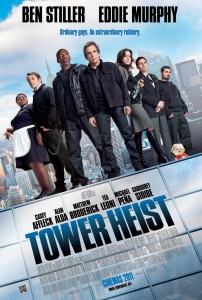 Sure is crooked for an expensive building.

As a director Brett Ratner has proven that he is perfectly capable of adequacy, but nothing more. His greatest claim to fame has been the Rush Hour films where he at least managed to realise that Jackie Chan knew fight scenes and Chris Tucker knows how to talk. Chris Tucker got fat. Jackie Chan got old. Neither are around to bail him out of this one.

That’s not to say that Tower Heist is awful – just polite, predictable and painless.

After the entire staff of an exclusive high roller’s apartment building in New York are told to consider the prospect that their life savings have been swindled away in an elaborate ponzi scheme they are both petrified and confused, after all the man who is alleged to have ripped them off is the gregarious and popular owner of the building Arthur Shaw (Alan Alda).

In fact initially the manager of the hotel Josh Kovacs (Ben Stiller) refuses the allegations – perhaps in denial – and he tells his staff to stand firm and have faith, that Mr Shaw will be proven innocent in due time…

Then one of Josh’s loyal colleagues attempts suicide.

Shortly after the FBI sweep the building in the investigation, after conversations with Agent Denham (Tea Leoni) Josh changes his tune and angrily confronts Shaw in his penthouse suite. The confrontation and subsequent damages to the classic car that the Shaw keeps on display in his living area cost Kovacs his job, and that of the two other employees who accompanied him to the suite, Deveraux (Michael Pena) and Josh’s brother in law Charlie (Casey Affleck).

Now broke and jobless, discussions of the future quickly turn from poor us to damned Shaw. The trio decide to rob Shaw of the supposed 20 million that he was assumed to have stashed somewhere in the building. With no prior experience or even the first clue about how it might be achievable perhaps the wisest move that they make is seeking expert help, but even there they half-arse it, approaching only a reserved tenant of the building with knowledge of investment markets in Mr Fitzhugh (Matthew Broderick) and a shady figure from Kovacs’ past in streetwise Slide (Eddie Murphy).

Tower Heist pans out pleasantly enough in a harmless 100 minutes. The problem here is the decided lack of edge, like somehow Ratner didn’t want to include anything challenging or even potentially offensive, strange given his couple of very public gaffes that accompanied the film’s release in the US, costing both he and Murphy their jobs at 2012’s Oscars.

Everyone is just so darned bland here. When Kovacs confronts Shaw with a crowbar he takes his anger out on a car, Affleck positively sleeps his way through his role as Charlie, and Matthew Broderick is practically invisible as the meek Fitzhugh.

Which brings me to the alleged rejuvenation of Eddie Murphy’s career – and folks how I hope it is so – but his role here is actually pretty limited, and in truth his funniest moments are when he reminds you of young Eddie. Angry Ed. Dangerous Ed. Given limited screen time and the limitations of a PG rating we never see Dangerous Ed, and Angry Ed only too fleetingly. In these moments Eddie threatens to seize control of the film, but alas the plot never gives him the chance. I remain convinced Eddie Murphy has more genuine blockbusters in him, Tower Heist isn’t his comeback vehicle though.

Final Rating – 6 / 10. So Tower Heist is the most frustrating of films. A movie with a decent cast that aren’t well utilised (only Alda as Shaw leaves an impression), a solid set up that is left underdone, and an end result that, while adequate, leaves you to wonder why they even bothered.