Here’s what I know about Jeff Martin:

So why have I attended four… wait, now five Jeff Martin gigs?

The answer is simple: mate TOG loves ’em, and to paraphrase the great sage Cookie Monster himself Jeff Martin is a sometimes gig. Too much is too much, but an occasional dabble is OK.

So last night me, TOG and Fat headed into town for a few beers and a show at the Rosemount Hotel to check out Jeff Martin’s latest musical project, entitled Jeff Martin 777.

Trying to ignore the constant tinny whistle in my ears so I can better compare last night’s gig with those of previous years is difficult, but lends a significant clue as to the main difference, there were no finicky musical indulgences and breaks to prep some obscure foreign musical instrument. 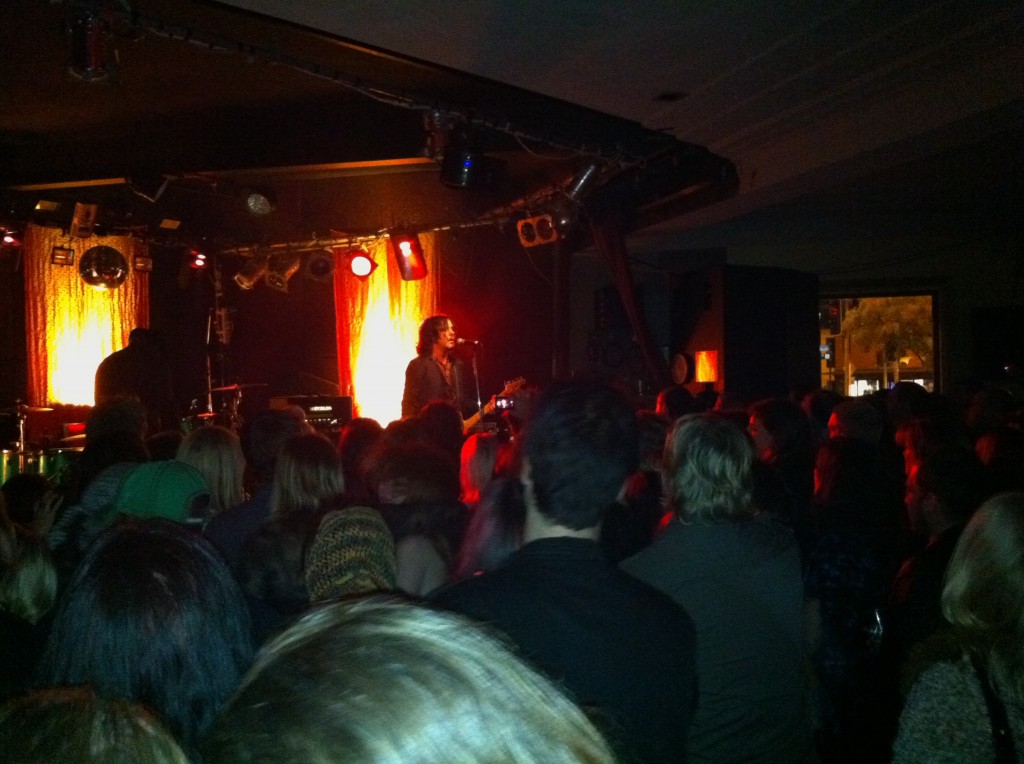 The bass player looked like ZZ Top crossed with Cousin It, but he and the drummer eschewed any theatrics, leaving Martin to provide the odd guitar solo and slightly self conscious flourish.

An early track where the lyrics include a reference to being played like a puppet motivated Martin to mime the actions of a puppeteer controlling a marionette – something that motivated myself, TOG and Fat to mimic it approximately every 13 seconds for the remainder of the night.

Kicking off with the title track of his new album with – as he called them – ‘Triple Seven’ The Ground Cries Out, the simple guitar, bass, drums combo kicked immediately into gear, the drum and bass underpinning the entire gig with precise competence and gave the amp system at the Rosemount Hotel a workout for a couple hours. They’re all good things by the way… but right now my throbbing headache begs to differ.

There was little glamour to the proceedings bar a half-hearted light show, Martin also kept his patter to a couple sentences here or there, this was all business. Noisy business.

After a brief bluesy interlude for the audience to catch breath it was straight into what I felt was the highlight of the night, a pummeling track called The Cobra that stretched for at least 6 minutes and sounded wayyyy better than the slightly thin album version.

The rest of the setlist was far from disappointing, with the new album being disparagingly described by Tea Party / Jeff Martin disciple TOG as ‘alternative rock’,  (an indication that it is a little unfocused) at least the album lends itself to being played live. While nothing after The Cobra really stood out – the 5 or 6 beers consumed by me to that point might have contributed – the gig held together well. The only departures being a couple of slightly blues tinged songs featuring a harmonica player that were neither here nor there.

In fact the only lowpoint for me was a song called Riverland Rambler, a song that I loathed in my few listens of the album, and one that wasn’t improved live. The bald, grey-bearded shirtless guy onstage jumping round like a git who apparently inspired Martin to write the song hardly helped either.

Prior to the show starting I asked TOG how many Tea Party songs he was predicting, he thought about 4 and as far as I could tell he seemed about right, (the only title I know being Sister Awake). I thought this might be a little disappointing to the diverse group of punters in attendance, many of whom looked to be pushing 50+ so I assume they were long time Tea Party fans, but it seemed that everyone went away pleased with the show.

Nothing Jeff Martin 777 did last night threatened to convert me to devotee status, but it is refreshing to see a guy give his all and put on a professional show that leaves everyone leaving content. The musical chops of the entire trio is unquestionable, and while I remain a non-fan I certainly appreciate that I witnessed a musician that is still near the peak of his powers, determined to continue plumbing away in his musical niche, even though perhaps the industry and consumer base have moved to other things.

It took about 15 seconds to give his apparently contractual ‘happy to be home’ comment, the rest of the night was pleasingly not as predicted, so I’ll allow him that one. For a no bullshit gig with some solid tracks and excellent administration, we’ll let you remain in Perth for a while yet Mr Martin.

I might even go and see you perform again in a few years.

While I try to throw a joke or two into proceedings when I can all of the opinions presented in my reviews are genuine. I don't expect that all will agree with my thoughts at all times nor would it be any fun if you did, so don't be shy in telling me where you think I went wrong... and hopefully if you think I got it right for once. Don't be shy, half the fun is in the conversation after the movie.
View all posts by OGR →
This entry was posted in Music. Bookmark the permalink.