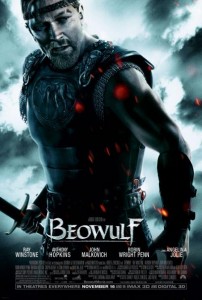 After decades of pillaging, looting and one would assume raping, it seems the King is pretty content with his lot. So he, his right hand man Unferth (John Malkovich), young trophy wife Wealthow (Robin Wright-Penn) and miscellaneous others settle in for a season of non-stop partying, apparently going on and on until the break-a-dawn.

That is until their non-stop boisterous ructions disturb the aurally challenged local 16 foot tall fairy tale creature Grendel, who lives in the mountains a distance away. Grendel, a normally placid giant with sensitive yet scungy ears, becomes so enraged and sensitive to the noise that he crashes the celebrorgy wreaks havoc, leaving many locals dead. The only thing missing was the sound of scratching as the record is suddenly shut down – that sound effect is used in a million films even when there is no record to stop.

A short while later through heaving seas comes a vessel carrying a small number of burly, heavily armed men. Upon alighting the burliest among them announces to the King and all in attendance that:

“I am Beowulf, and I am here to kill your monster!”

The King is pleased with this turn of events, the shifty 2IC Unferth is not, but as every card player knows King trumps shifty 2Ic, so another celebratory dinner is swiftly organised to thank Beowulf (Ray Winstone) and co.

That very evening the rumpus once again awakens grumpy old Grendel, who probably muttering something about those pesky kids meanders down the mountain to order them to shut their damn music down.

Finally a sensible use for computers…

After a battle Beowulf trails Grendel back to his lair, where he meets Grendel’s Mum who looks like a Computer Generated mostly naked Angelina Jolie… at this point I stopped pretending I was a movie reviewer and started a different thought process entirely.

At one point the film fast forwards several decades and it turns out that (now King) Beowulf had similar thoughts to mine and no doubt millions of other males, telling his wife and subjects something to the effect of “I’m off to the mountains to get the paper. Don’t wait up,” every week or so.

Beowulf is immaculately animated and simply amazing to look at – even the non-Angie scenes – though they thankfully erased the various tattoos and the zipper marks from her various children. The characters look exactly like their real life counterparts except when they don’t, I don’t remember Jolie having a tail, this is the Jolie that wore the silver wetsuit in Tomb Raider, only even better.

Furthermore if it is accurate I want the personal trainer Winstone has!

The story is apparently a well worn classic, though not one I had heard of until this release, but to me it still seemed quite straightforward and just a little lacking, like a basic Aesop fable stretched to two hours. I loved looking at Beowulf, but after a while I stopped enjoying watching it quite as much.

Final Rating – 7 / 10. An animated film purpose built for adults, albeit nerdy bookish ones who harbour dreams of Vikings and fantasy creatures. And give me the CGI Jolie over the current real life iteration any day.