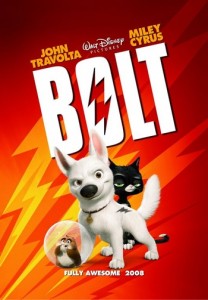 I liked parts of Bolt, but it has so many flaws and logic inconsistencies that I eventually had to shelve a ‘normal’ review and remind myself that ‘it’s just a kid’s movie’.

Funnily enough I never have to do that with Pixar films.

Bolt (John Travolta) is a scrappy little white superdog with a spunky little 12 year old tomboy owner named Penny (Miley Cyrus). They adore each other and spend each day saving both each other and society…

Only they aren’t. It’s all merely a top rating TV show in which everyone is in on the ruse except Bolt himself – he is apparently a better actor when he believes it is real. At the conclusion of each day saving the planet Penny takes Bolt to his trailer, gives him some food and a hug, and leaves until next time. There is no offscreen cavorting or playtime. (Which if you think about it is especially cruel once you realise why.)

Bolt is frankly amazed one day to find that he does not actually have a superbark, laser eyes or the ability to leap dozens of metres. This unfortunate day happens when he is accidentally posted across the country from Hollywood to New York, immediately deciding he has to get back to LA as Penny is no doubt worried and susceptible to evil without his protection.

Now without effects, hidden stunt wranglers and choreographers Bolt is merely a little dawg, even his distinctive bolt shaped marking on his fur proves false. He cannot do anything super or extraordinary, and pain is now very real. What he can do is talk… – but of course – which enables him to converse with a scrawny streetwise alley cat named Mittens, who Bolt bullies into providing him with assistance in getting cross country.

Along the way they meet a hamster named Rhino, who is not only aware of Bolt’s TV identity, but who considers himself Bolt’s biggest superfan. He tags along to form a trio of furry fun, only he never leaves his exercise bubble along the journey, a cross country trip that was never destined to go smoothly.

Meanwhile in Hollywood Penny has already realised her buddy is lost and is desperately trying to track him down even as the TV studio exhorts her to move on and find another dog to play the role… the show really must go on with or without Bolt.

Bolt has a couple of reasonable action sequences – most notably the opening few minutes before the audience is let in on the facts – and a few reasonable jokes, mainly from Rhino the deluded hamster.

I found Travolta a strange choice as Bolt the dog, I know he boasts ‘star power’ but is that really a determining factor when the audience is always going to be predominantly children? Miley Cyrus is a similar ‘name’ choice, but at least she sounds like a young girl.

Final Rating – 6 / 10. Ultimately Bolt never proves itself as anything more than a kid pleaser, and even then it is bettered by many other films. The opening sequence grabs you and Mittens and Rhino are reasonable kid’s flick characters, but Bolt collapses under its own lack of logic.

Put another way my 4 year old gets to watch a movie per week in 30-40 minute installments. He has seen maybe 10 films including Bolt. He continually asks for Nemo and Toy Story again and again. Bolt hasn’t been mentioned since first viewing… furthermore I don’t plan to offer it up as an option.