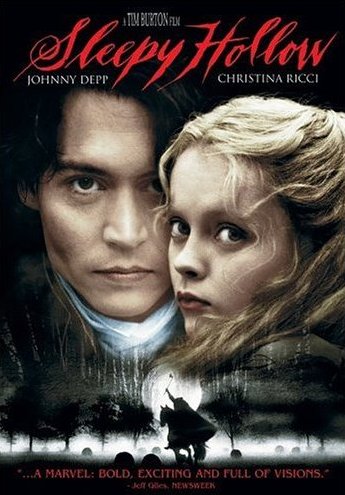 Lucky there ain’t much sun in these parts!

I only realised that since Beetlejuice in 1988 I have seen every single full length film Tim Burton has made, but scrolling down the imdb page today I can’t say that aside from this film I found any of them especially memorable.

Granted Burton has undeniable visual flair and his movies POP out of the screen, also inarguable is his willingness to experiment and try new things, I mean who else has a musical, a big budget comic book adaptation, and stop motion animation films on their resume. So while I’ve admired his output and will continue to check out his films he has never made anything that resonated with me like Sleepy Hollow does – and besides some of the more obvious reasons I can’t explain why I like it so much…

When Constable Icabod Crane (Burton muse Jonny Depp) is reposted (but really shuffled out of the way) to use his advanced investigation and new fangled means in detection to ascertain why the average height of the locals is reducing he obeys only as it is his duty.

Upon arriving in the small town and meeting with the locals he is sat down and sombrely informed that the 3 recent victims who no longer have use for nice hats were allegedly abbreviated by a serial killer who is similarly headless, only this one rides an undead steed and tops his victims with swords, axes and scythes. The Horseman is essentially dead, so bullets and swords do little damage, he also looks a lot like Christopher Walken (in a wicked cameo) when his bonce is perched on the shoulders, and his teeth are filed into fangs for a more imposing and unnerving appearance.

Now Icabod is above all a creature of logic and reasoning and all this sounds too far fetched, so his takes his Lil Sherlock bag filled with self made tools and looks into things, vowing science and analysis will do the trick.

When his initial findings bring up little of substance Icabod turns to the locals and commences questioning those that might know, it seems that everyone in the quiet town has secrets and everyone is somehow related in some way by blood or marriage, but ultimately like the recently deceased he comes up short.

The more senior town officials – namely the men who requested police assistance in the first place – are particularly cagy and there is much muttering and conspiring behind closed doors.

Icabod is quartered in the loft of a well-to-do farmer Baltus Van Tassell and his wife Lady Van Tassell… and daughter Katrina (Christina Ricci). Icabod and Katrina have a spark between them, (which seems logical, after all one is 21 Jump St and the other the only young chick in town and also someone who wears a dress so tight her cleavage is up around her ears!). 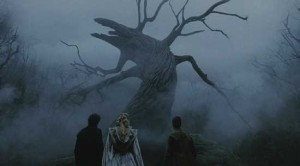 “Using my powers of deductive reasoning I’m pretty sure this is a tree.”

When still another victim is taken Icabod takes on the newly orphaned son as his apprentice and dogsbody – and the two continue the case, often with young Katrina alongside.

Before I cut descriptions of the plot short – so to speak – I must say that at one point Icabod indeed learns that the Headless Horseman is not only possible but he is perpetrating the crimes – though possibly with the guidance of others.

Through the remainder of this excellent film Icabod is given cryptic messages and gradually his investigation and interpretation leads him to the truth which involves witchcraft and deeply buried local secrets.

He not only discovers where the Headless Horseman “resides” but how he came to be in his current state, and more importantly how he selects his next victims,

I believe that Sleepy Hollow was predominantly shot on one massive sound stage, which is amazing considering just how many scenes occur outdoors, including horse-and-buggy chases.

The sets and costumes are all grayish and pale and the countryside forever coated in light mist – is that why Johnny Depp has such flawless skin? – all the better to highlight the garish unnatural looking red of the blood that frequently spurts and gushes, often onto Icabod himself.

Being a Tim Burton film there are constant gothic touches, odd imagery and the afore-mentioned blood, this is undoubtedly his most violent film too (Sweeney Todd is runner-up), aside from the frequent and graphic decapitations citizens are impaled and severed in half.

As I mentioned earlier Sleepy Hollow has all the base elements that make up a Tim Burton film so we know it will at least be interesting and a visual treat, but Sleepy Hollow goes a couple steps beyond the normal Burton effort, as well as the everpresent Johnny Depp, the formal sounding dialogue, the amazing visuals and the attention to detail this one has a reasonably effective plot even with an undead assassin and witchery.

It is the story that often gets set aside in Burton’s flicks to make room for more odd antics and intricate visuals, Sleepy Hollow though has a plot that keeps you interested in more than what you are seeing, so even if this looked banal and flat it would still be worth watching – the fact that the story is aligned with a Burton production elevates Sleepy Hollow above all other Tim Burton efforts.

Final Rating – 8.5 / 10. The stars finally align for Tim Burton, at last a film that looks great but is backed up by performances and plot comparable to the backdrop.