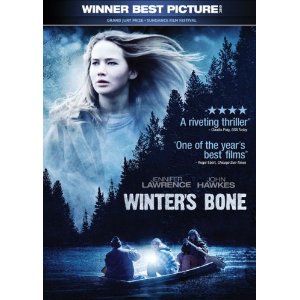 Even countries that are referred to as “Developed” and “First World” have areas where times always seem tough.

In Winter’s Bone this place is the state of Missouri in America. The action takes us to various homes and it would be fair to say that even the “less needy” aren’t exactly living in the lap of luxury. The homes are cluttered and messy, the structures makeshift and flawed, and the diet consists of whatever can be scrubbed up at short notice – one scene featuring a squirrel hunt and the subsequent preparation of same left me squirming a little.

One of the more down and out families in the area are the Dolly clan. With the father absent and the mother uninvolved, the responsibility of looking after Ma and siblings aged 12 and 6 falls solely on the shoulders of eldest Ree (Jennifer Lawrence), only 17 herself.

This all sounds hard enough already, Ree cannot find work, has no money and no car, and the only pot of gold at the end of the rainbow appears to be joining the army and getting an up front lump sum, but that would entail leaving her brother and sister to fend for themself. Not an option.

But bad can always become worse, as Ree is informed when she learns her bond jumping Dad has put the family home up for assurity that he will show for his hearing – a hearing that looms in only days. Ree is told to expect that a no-show means they will lose the house within weeks.

Ree might be only 17 and thrust into maturity when most 17 years old girls are singing Hannah Montana songs into their toothbrushes, but she is made of different stuff.

Ree proclaims that she will find her Dad and make sure he is at the trial.

With Ma having a total mental shutdown for reasons not explained, various neighbours and friends being no help, and Uncle Teardrop basically telling Ree to leave it alone, she moves on to other friends and associates of her father to pick up the trail.

Now it needs to be said that Mr Dolly was a man who made methamphetamines to make a buck, that was what he was arrested for. (It turns out that this is apparently an oft-chosen occupation in Missouri as the drugs can be made cheaply with various easily sourced materials.)

Looking for a known drug producer of course leads Ree to other known drug producers, people who are understandably protective of their own interests and not too eager to divulge details and fine print to a teenage girl, some with forceful warnings – an early one being “I said shut up once… with my mouth.” Read into that for yourself to get an idea of how the second message might be delivered.

But the dogged and determined Ree pursues her missing father, driven by desperation – and the fact that there seems no other possible alternative.She comes across various equally beaten down looking, scruffy and dangerous people, most of who she is apparently related to in some way.

Everyone she speaks to says the same two things, informing Ree that they don’t know her Father’s whereabouts and that she should assume he is dead, give it up and go home.

After an exhaustive day’s search on foot across an unforgiving territory dealing with inhospitable people – Ree tells the local police that she is positive that her Father is dead and that he can’t possibly attend the hearing. The response: provide either your father or proof of his death or you lose the house in about a week.

There aren’t too many events in Winter’s Bone that could be described as twists or surprises as the story unfolds gradually and deliberately. 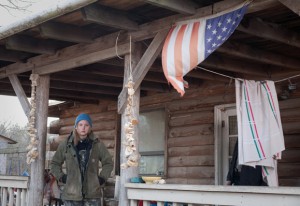 The film would likely have been still solid with other actors as Ree, but Jennifer Lawrence is amazing in a pretty dark and thankless role. Her face is at once a picture of both resignation and determination. There are scenes where she vainly tries to show her 12 and 6 year old siblings just how to fend for themselves while knowing full well that they are not of an age or maturity to handle such tasks. (It must be said that John Hawkes as Teardrop is excellent too.)

It is this inevitability that drives her into areas and across the paths of those that police and grown tough guys wouldn’t dare disturb, Ree sees no other alternative and rather than simply fold and allow her and her family to give up all hope she puts herself in grave danger knowing full well that any false step or poorly chosen word will see the end of her and family alike.

Winter’s Bone is a gritty, bleak drama in the same vein as Undertow and Shotgun Stories. I liked both of those films and thought them both excellent, but it is the unenviable situation that Ree faces and the actions she takes to protect her family – all fuelled by the performance of Jennifer Lawrence – that make Winter’s Bone a better film than the other two.

Final Rating – 8.5 / 10. Definitely not the most entertaining film of 2010, but perhaps the best. If Jennifer Lawrence doesn’t get mentions at awards time it is criminal.