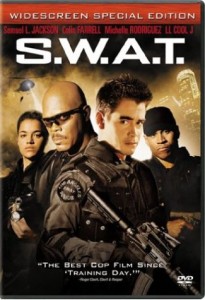 Do I really need to write more?

OK. As the poster says S.W.A.T. are the guys the cops call on when they are stuck, and in this film that is a lot. In fact if I was a normal cop I would hate this film, which suggests that they are unable to hit a gunman in plain sight and couldn’t hand out a parking ticket without fucking it up. 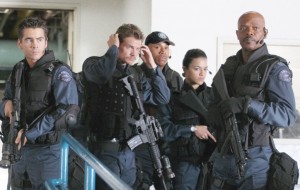 Thank goodness for guys like Sam Jackson, Michelle Rodriguez and Colin Farrell’s eyebrows that are as thick as rolled up carpets.

For the better part of an hour they run through montage after exhausting montage backed by mediocre soft-cock rock. Even their day-off has it’s own montage!

Anyway the seemingly disparate crew comes together and *Sniff* even learns to rely on each other. They then hunt down a paint by numbers – and similarly pretty bad guy (he’s French, so it’s OK to hate him), who with one televised sentence manages to turn an entire city into cop-killers and bounty hunters, which is a cinematic justification for one of the more moronic half hour finales in history.

I guess the moral of the story is: Why even have cops when you have S.W.A.T.?

Final Rating – 4 / 10. If you’re the Joe Swanson type that loves Steven Seagal re-runs (his later stuff, not the few early few decent ones) and screaming “GET SOME!” at the TV then this is the film for you. (Sorry for all the pesky two and three syllable words.)