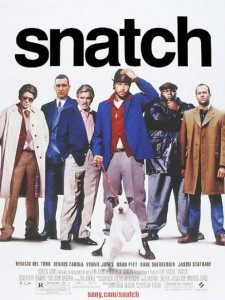 At the very centre of Snatch is an 80+ carat diamond, but there is a hell of a lot moving around in its orbit.

The story starts with the diamond heist by a crew headed by Frankie Four Fingers (Benicio Del Toro), in a clever sequence that follows – via security monitor screens – the would be thieves as they move through the building.

The plot then largely builds towards an unlicensed (read ‘rigged’) boxing match, with the purchase of a caravan at one point introducing new characters and providing new twists and turns.

But almost everyone knows of, and wants, the huge diamond.

Snatch features dozens of colourful characters from the underbelly of society, thugs, henchmen, conmen, promoters , thieves, hitmen, heavies and just plain criminals. They sport names like ‘Bullet-Tooth’, ‘Turkish’ and ‘Brick Top’, and seem to value all human life aside from their own lightly.

After a series of coincidences and unfortunate timing Turkish (Jason Statham) finds himself involved in finding a suitable replacement for an injured fighter for shonky promoter Brick Top’s next event.

Brick Top is a legitimately hard bastard, scared of no-one and capable of anything, he is blunt, brutal and vicious. His favoured method of disposing of his victims is chopping them up and feeding them to hungry pigs.

Turkish on the other hand is merely after a quick buck, and rather than disappoint Brick Top and find himself pig food he seeks out a gypsy hard man named Mickey (Brad Pitt) with whom the aforementioned caravan deal was brokered (unsuccessfully) by his gormless associate. 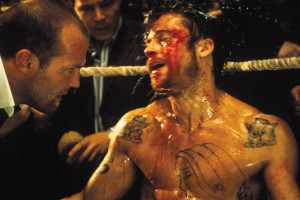 “Jennifer, ish that you?”

Mickey is skinny and looks outmatched by can take a lot more than one punch, and is a bare knuckle boxing expert. Also being a gypsy we are lead to believe that he and his crew should probably not be trusted in any situation.

The plot is quite circular and has far more characters than I have described, with the action moving around as things develop and as they interact. As always with Guy Ritchie films the soundtrack is uniformly excellent, with the instrumental tracks being exceptionally funky in this case.

Having so many characters means that it is impossible to play favourites, and over the course of the film many of them indeed get picked off, especially near the conclusion as everyone nears in on the diamond which goes through more hands than a bottle of Courvoisier at a hip-hop album release party (I was going to say Justin Bieber at a pedophile conference but got cold feet).

The film has a high body count but aside from the boxing sequences most of the violence is confined to the offscreen kind, in fact some of the descriptions and dialogue are far more cringe-inducing than anything you’ll actually witness.

Speaking of dialogue, while the plot of Snatch is probably a step below that of Lock Stock and Two Smoking Barrels the dialogue is perhaps more rich and definitely funnier this time around. Ritchie might benefit from picking a group of characters from Snatch and Lock, Stock, then just making film after film with them all interacting. He could introduce new characters and subplots along the way, and could save himself from making increasingly samey films with basically the same characters, just with different names.

Lock Stock was great, Snatch very good, but everything he has done since is average at best and often a lot worse.

Snatch works because at the time Ritchie had yet to exhaust what a group of nefarious underworld characters could get up to while swearing frequently and killing each other. Name actors agreed to appear in these new and exciting genre films because no-one else was doing it. In the years that followed though everyone jumped on the bandwagon and created their own bastardised rip-offs.

On top of all this and perhaps most unfortunate of all for Guy Ritchie, he had already taken his limited fame and used it to marry Madonna, thus tarnishing him in the eyes of the sensible even more.

He still gets to boast of two excellent films though, it is just a shame that he didn’t get to make many more.

Final Rating – 8 / 10. As mentioned it’s quite Lock, Stock-esque, but that doesn’t make it any less entertaining. A complex web of characters, clever dialogue and well choreographed events.

While I try to throw a joke or two into proceedings when I can all of the opinions presented in my reviews are genuine. I don't expect that all will agree with my thoughts at all times nor would it be any fun if you did, so don't be shy in telling me where you think I went wrong... and hopefully if you think I got it right for once. Don't be shy, half the fun is in the conversation after the movie.
View all posts by OGR →
This entry was posted in Film, Jason Statham, Movie Reviews, Superstars, Worthwhile Movies. Bookmark the permalink.