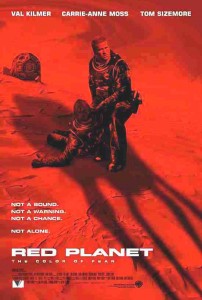 For some reason I remembered this as a pleasant surprise, but while it is by no means a bad film it wasn’t near as worthwhile as I had remembered.

In simple terms the Earth is fucked (gee isn’t everyone going to town on that one? Thanks Al Gore!)… so we’re up and moving to Mars.

Many unmanned vessels have been sent to Mars over the years to make the atmosphere breathable for the future guests. But before we all pile the bags on the roofrack of the shuttles a pre-emptory last minute check is to be performed to make sure it is habitable. The first manned mission to Mars.

Along for the ride is a robot with a clever acronym name of AMEE who can perform exploratory tasks, basic maintenance and in the unlikely event it is needed – military attack capabilities. But she won’t need those will she…?

6 months into the journey… MARS! Should’ve expected that really.

From here on things move quick. A malfunction results in the crew having to jettison from the main ship sooner than planned, though not all make it. Those that do find that the planned drop zone is not as hospitable and settlement ready as planned, and with oxygen running low and time running out a quick Plan B desperately needs devising. I don’t know if running out of action wasn’t urgent enough for the filmmakers, but on top of all this there is this little matter of AMEE needing some minor repair, specifically her ‘sanity’ chip has gone troppo and she alternates in and out of military-killin’ mode.

With one member still aboard the main ship able to contact Earth (on delay) waiting for the crew to return – if they can – Plan B is drafted and put into action. For the remainder of the film for every + that the surviving members are luck enough to enjoy there are four or five –‘s. These include but are not limited to: Space-fire! Space-storms! (I really don’t need to put “space” in front do I?) and extremes of temperature. On second thought if all that happens within the first 12 hours or so of being on Mars maybe it wouldn’t be that much fun to live on anyway? I might stick with the known quantities provided by a polluted and soiled Earth with a gradually rising temp thanks!

Unlike the setbacks experienced by the crew in the main the pluses in the film outweigh the minuses, but not by much. There is a distracting techno soundtrack that at times seems out of place, some scenes seem forced in and others that should be more dramatic are glossed over.

(I realise that acting means pretending to be someone you are not somewhere you are not, but I reckon the actors here must’ve felt like dicks walking around the desert in spacesuits.)

Final Rating – 6.5 / 10. After Apollo 13 struck big there were more than a few space themed films. Um… this is one of them? (Mission to Mars was another in the very same year. AWKWARD!)…