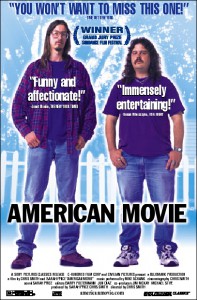 No Hollywood hasn’t got this lazy yet that they just tell you what it is and where it was made, American Movie is a documentary about a man with perhaps the greatest divide between ambition and ability currently working in film, and his efforts to make his debut film.

As a digression though I have found altogether too many films that just say “whack American in front of something and there’s your title!”, maybe it’s familiarity, maybe misplaced nationalism, but these films always seem to make a few bucks, leading to more and more.

So we have “American…

All in the last decade off the top of my head, with dozens more out there.

Back to Mark Borchardt, the subject of this American Movie. Mark is a movie devotee who clearly has at least put in the time watching and studying film. He has grand plans to become an established filmmaker in his own right, he just needs to make his debut short film to drum up some money so that he can make his name with a full length feature.

The film will be called NorthWestern, and while early goings of this documentary introduce us to many people already associated and indoctrinated into the process it is clear early that this won’t be a tale of cinematic triumph against the odds.

Even Mark’s most ardent supporters admit that years have passed with little or no progress. Mark is idealistic, ambitious, passionate and sincere. But he is also delusional at times, ill equipped and has a chasm between his ideas and capabilities.

Low budget is low budget, and it worked for Sam Raimi and Bruce Campbell, but Mark is an ideas man without a clue.

In any case the intrigue isn’t what the film will be like or even if it will be finished, it is the people dragged into Mark’s life because or at times despite the film.

Mark’s Mum is his biggest supporter, his Dad seems to be hopeful but doubting, and resentful of Mark’s open animosity and hatred of a 9 – 5 existence, seeing as that is what his Dad himself did. Mark has kids, exes, a girlfriend, cast and crew to deal with day by day. But it seems only one true friend in Mike Shenk (who deserves his own movie – I’ll get to him) and dear old Uncle Bill.

It seems Mark’s unerring sense of self belief and endless optimism convinces others to get involved without the slightest assurance or inkling that anything will ever eventuate.

But even Mark has doubt at times, it is obvious to all that when he drinks his resentment of authority and a more hardworking existence rise quickly to the surface, and he lacks the ability to say “no” to alcohol, allowing it to set himself further and further behind, both financially and cinematically.

But enough with the serious stuff. American Movie is a well made doco about a man trying to make his own personal Citizen Cain with a Troll 2 budget and skillset. Mark is enigmatic and at times compelling but it is Mike Shenk who provides the reason to watch American Movie.

Mike is a self confessed unemployed former habitual drug user. He never seems ‘there’ even though he is right… there. His dazed expression and half breathed high pitched voice continually suggest a room with the ‘Vacant’ signs up, and his bizarre stories to nowhere only provide further assurance. 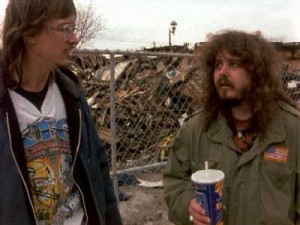 Planning a sensible withdrawal of troops from Iraq…

In limited screentime Mike steals the film with his rambling stories, acoustic guitar noodlings and tales of personal punishment suffered through his previous drug abuse, all laced with a familiar blank smile and a shrill girlish laugh.

When Mike steps to the mic (Beastie Boys style) late in the film and lets loose with the most blood-curdling scream I can recall on film for audio looping it is simultaneously incredible, bewildering and hilarious that this deathwail can come from such an unassuming stoner.

Final Rating – 7 / 10. Mark Borchardt is a walking, drinking, profane, bespectacled dichotomy, and evidence that film smarts don’t necessarily mean smart films. On this occasion it does make for compelling viewing – albeit perhaps more about a man triumphing over his limited abilities.