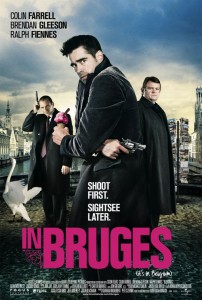 The poster didn’t help with making what the film is about any clearer.

As the opening moments of In Bruges tell us Bruges is a city in Belgium… wikipedia tells me more “Bruges is located in the NorthWest of Belgium… has a population of around 120,000… is a historic city and has significant economic importance thanks to its port…”

Well get me there Qantas!

For the purpose of this film though Bruges is the home away from home for two hitmen laying low after a botched job on a trip suggested and financed by their boss.

The two hired assassins are Ray (Colin Farrell) and Ken (Brendan Gleeson), their boss is Harry (Ralph Feinnes), but we’ll get to him later…

Ken wants to look around and use the enforced two week holiday productively, Ray just wants to get out, they agree to compromise at times by sightseeing and drinking heavily in equal proportions, but even that gets dull quick for Ray.

As Ken has experience and perhaps 20 years on Ray, and each belong to a different generation with differing outlooks on life and entertainment value the pair bicker and moan like an old married couple – they both know they’re stuck with each other for the next while but still refuse to agree on everything, even if it makes it easier for the partner. Ray is often a petulant little child, going on and on about getting out for a beer and whining and throwing minor tanties when he doesn’t get his way, so Ken let’s him head off unescorted one night so he can stay in the hotel and await a call and further instructions from Harry.

It turns into an eventful night and triggers the remainder of the film.

In one evening Ray manages to go on a date, nearly have sex, drinks and takes drugs with midgets/dwarfs (I can’t remember the PC term: Short-arses?), and is involved in a punch up AND an incident that results in someone being shot… Bruges may not be boring all the time!

Unfortunately for both Ray and Ken the phonecall from Harry only makes things much worse.

In Bruges has witty and clever dialogue that rarely veers into schmaltzy or contrived, a few of the events and coincidences go a little beyond believeable (everyone runs into everyone repeatedly) but they are more entertaining for it so the viewer is more likely to go with the flow. As much of the film has the duo waiting and bickering in between sightseeing and drinking violence is infrequent, but when it occurs it is all the more impactful.

There is no concession also for accents or slang, I had to strain my ears a few times to get exactly what was being said, which was only more difficult once some peripheral characters were introduced with thick localised American accents, so I was just grasping one sentence when another in a different accent was coming at me for me to interpret.

One speech that was clear even if you didn’t hear every singly syllable I will refer to only as Ken’s C speech to Harry when he eventually shows up. It can’t be repeated on this family friendly website but it’s fair to say Ken is less than jocular to his employer.

It’s hard to explain In Bruges, it is not an action film, not really a drama or a comedy but not enough of anything else to be filed elsewhere. Above all though it is clever and amusing, with a few decent twists and turns along the way and two of the most likable – if un-PC – hitmen to feature in a film for some time. (If you can make Colin farrell likable after Alexander and Miami Vice that’s an achievement in itself.)

I didn’t really know what to expect beyond a few “Yeah it’s really good(‘s)” and even now find it hard to capture the true charm of the film.